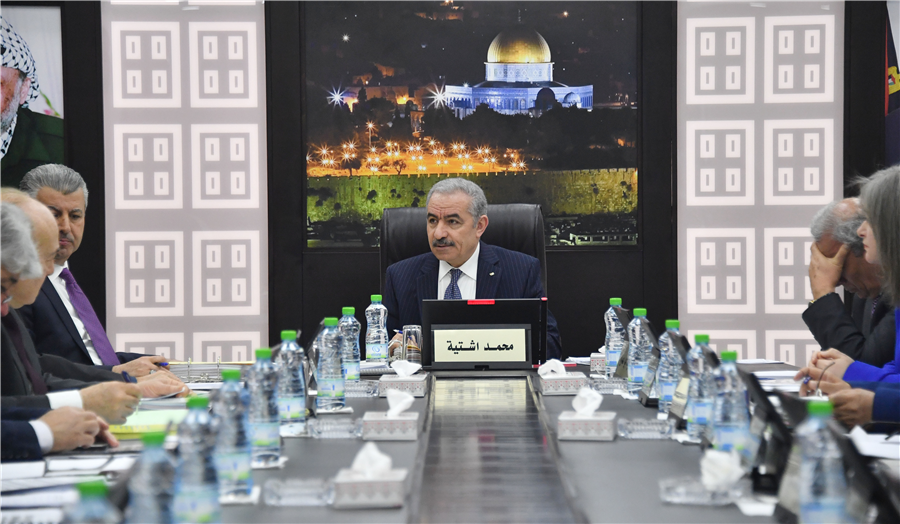 The Cabinet warns against the consequences of Israeli plans to establish new settlement units in Jerusalem and a rail line from Lod Airport, calls on Palestinian workers to stop working in Israeli settlements, criticizes the formation of the American-Israeli committee, and condemns Amazon for its latest measure in offering free delivery services to Israeli settlements.

During his statement at the weekly Cabinet meeting, held in Ramallah today, Prime Minister Dr. Mohammad Shtayyeh announced that the government has taken all necessary precautionary measures to deal with the coronavirus and affirmed that Palestine is free of this virus.

Separately, Dr. Shtayyeh warned against the consequences of the latest announcement of the occupation government to establish thousands of settlement units in Jerusalem and Qalandia Airport and condemned the ongoing, provocative settler incursions against the Al- Aqsa Mosque.
Moreover, Dr. Shtayyeh criticized the Israeli plan, approved yesterday, to build a rail line from the Lod Airport directly to the Buraq Wall in the Old City of Jerusalem, which violates the historic basin of Jerusalem. In this context, Dr. Shtayyeh called upon the international community and the UNESCO to intervene immediately to stop this project. “The occupation government seeks to completely isolate Jerusalem from the rest of the Palestinian territories and kill any prospects for establishing an independent State of Palestine in accordance with the principles of a two-state solution,” Dr. Shtayyeh stated.

In addition to that, the Prime Minister called on Palestinian workers to quit working in Israeli settlements and urged contractors to reject all bids in confrontation of this violent attack against our land and Jerusalem.

The Cabinet, further, condemned the formation of the American-Israeli committee, headed by the US Ambassador to Israel, David Friedman, to draw up the borders of Palestinian cantons as proposed in the so-called 'Deal of the Century’. “These plans would take hold of more than 40% of the West Bank and turn it into scattered, isolated areas, yet, separate the Jordan Valley from the rest of the Palestinian territories,” Dr. Shtayyeh told.

To conclude, the Cabinet condemned Amazon Company for its racist measure in offering a free delivery to Israeli settlements in the occupied West Bank as being part of Israel while not providing the same service to Palestinians, which gives legitimacy to settlements.