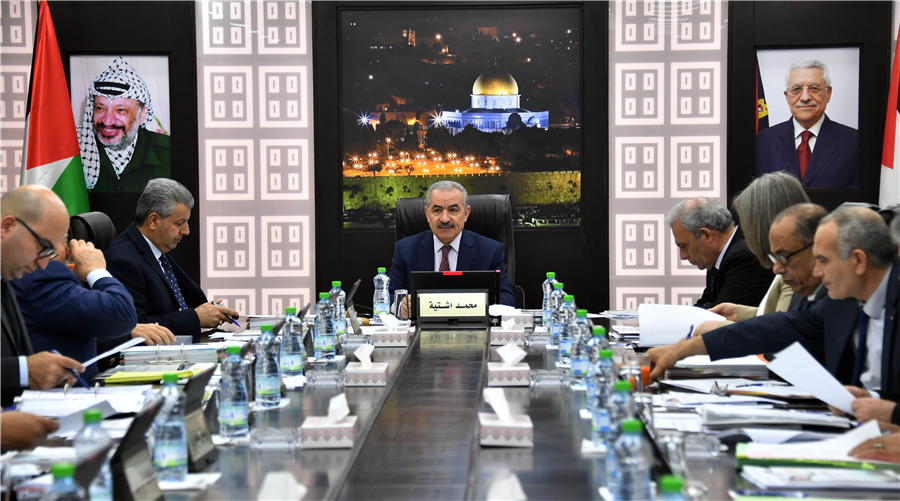 The Palestinian Cabinet condemns new Israeli settlement plans in Jerusalem and Hebron, warns of dealing with the outcomes of the Manama, Bahrain workshop, especially the American Hospital Project in Gaza, and stresses that the general elections are the key for ending the internal division and preserving our national project.

In his opening statement, during the weekly Cabinet meeting held in Ramallah today, Prime Minister Dr. Mohammed Shtayyeh condemned the hostile settlement plans announced by the Israeli government last week in the cities of Jerusalem and Hebron. In this context, Prime Minister Dr. Shtayyeh called upon the international community to immediately intervene to compel Israel to revoke its decision that expropriates the Palestinian land and undermines the two-state solution. “The Palestinian Government firmly rejects such plans and declares it will exert all possible efforts to counter them. We call on the international community to force Israel to immediately revoke its decision,” Dr. Shtayyeh stated.

“Nowadays, Israel is implementing a destructive plan with wide political objectives, in conjunction with the escalation of settler terrorism under the protection of the occupation forces targeting Palestinian neighborhoods, cities, camps and villages,” Dr. Shtayyeh told.

Additionally, Dr. Shtayyeh pointed out that “the number of Israeli settlers in the West Bank exceeds 711 thousand settlers and Israel is working to increase that number, which requires an immediate response from the international community towards such measures.”

In a different context, Prime Minister Dr. Shtayyeh expressed his and the leadership’s deep concerns over the implementation of the outcomes of the Manama, Bahrain workshop within the framework of the so-called “Deal of the Century”, embodied by the establishment of the American hospital, industrial cities, a port and an artificial island in the Gaza Strip, in line with the previously announced plans by the US President advisor, Jared Kushner, at the Manama, Bahrain workshop last June. “Such plans clearly reflect the American scheme, which refuses to deal with the political demands and rights of the Palestinian people, and intends to replace them with economic projects and humanitarian activities,” Dr. Shtayyeh affirmed.

In this regard, Dr. Shtayyeh stressed that the ongoing Israeli isolation of the Gaza Strip through the siege and economic temptations is only a step within the framework of the US-Israeli plans to eliminate the Palestinian national project and to implement the “Deal of the Century” clarifying that “The price for implementing projects under the pretext of humanitarian aid would permanently separate the West Bank and Gaza Strip, and strike the foundations of the national project.”

Dr. Shtayyeh, further, questioned the coincidence of launching these projects in conjunction with discussions and efforts regarding the Palestinian general elections to achieve national unity. “Such projects are initiated under a humanitarian framework while the truth behind them is only an arrangement for maintaining the status quo in the Gaza Strip and diverting the compass from the direction of our national unity. Therefore, the General elections are the key for ending the internal division and achieving national unity,” Dr. Shtayyeh expressed.

To conclude, Prime Minister Dr. Shtayyeh congratulated Christian citizens in Palestine and the world on the occasion of Christmas. “The light would only be complete when we celebrate the liberation of Jerusalem and when our prisoners see the light of freedom,” Dr. Shtayyeh finalized.