The Prime Minister at Shireen Abu Akhleh's Memorial Service: A Martyr of Jerusalem, A Witness of The Occupation's Crimes 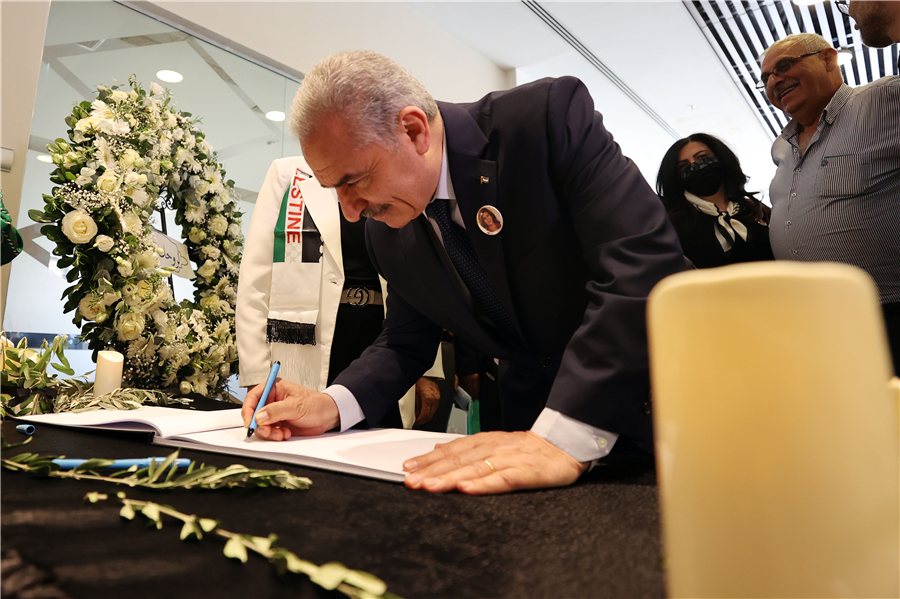 The Prime Minister at Shireen Abu Akhleh's Memorial Service: A Martyr of Jerusalem, A Witness of The Occupation's Crimes

“We declined the joint investigation into the assassination of the Palestinian-American Journalist Shireen Abu Akleh because the ones who distort the history of a nation and steal land and a homeland will falsify the truth; we do not trust them. Therefore, we turned down the joint investigation. We decline to hand over the bullet! On the contrary, we want the rifle that assassinated Shireen.”

The aforementioned remark was made by the Prime Minister of the State of Palestine, Dr. Mohammed Shtayyeh, at the memorial service of the Palestinian-American Journalist Shireen Abu Akhleh in Ramallah, under the auspicious of H.E. Mr. President Mahmoud Abbas, organized by the Ministry of Women's Affairs, in the presence of the Vice-President of the Fatah Movement, representing His Excellency the President, Mr. Mahmoud Al-Aloul, the Governor of Ramallah, and Al-Bireh Dr. Laila Ghannam. The Memorial was attended by members of the executive committee of the PLO and the Central Committee of the Fatah Movement, Ministers, Official, Religious, Security, and Legal Figures, Unions, Representatives of Palestine's diplomatic community in Palestine, the martyr's family, her Al Jazeera colleagues, and journalists.

“A Martyr and a Witness,” With these words, His Excellency the Prime Minister described the Palestinian-American journalist, Abu Akhleh. Dr. Shtayyeh further stated, “[Shireen], evidence at the International Criminal Court for crimes of the Israeli occupation and a martyr of the City of Jerusalem in pursuit of the truth about Palestine and the true account through the media. Shireen was and will always be a symbol of truth and right.”

His Excellency proceeded, “Shireen was the link, the thread of silk and freedom, between Jenin refugee camp, Jerusalem, Gaza, the Arabs, Palestine, and the World. Witnessed with her own eyes what we saw through her camera.” The Prime Minister said: "Shireen served her country, Palestine, in her life and martyrdom. For the past 40 days, every foreign official who visited Palestine expressed his condolences to me and Palestinian citizens. Every capital in the world condemned her assassination, and every international organization mentioned her name."


“‘Shireen of Jerusalem’ stayed in the city and maintained her permanent presence in Jerusalem. She was at the church prayers and in the Al-Aqsa Mosque compound for protection, taking pictures and live broadcasting. Shireen walked throughout the Old Town, Wadi al-Joz, Resurrection St., the path of Pain St., the doors of the city, alleys, and squares. Shireen, the human, the woman, who loved life, said what needed to be said when it needed to be said. She warmheartedly provided for the poor. She gained the love of the people with her honesty, kindness, calmness, and giving.”

With such a heartfelt eulogy, H.E. the Prime Minister spoke. In conclusion, Dr. Shtayyeh expressed, “[His] condolences to Shireen’s family and her colleagues everywhere. May Shireen’s soul rest in peace. I pay tribute to Al Jazeera Channel for remembering her every day since her martyrdom, and I commend the courage of Sharif Al-Azam and her colleague Shatha Hanayshah and wish for the recovery of her colleague Ali-Samoudi. My regards to journalists for their efforts and risks in speaking out loud for Palestine.”