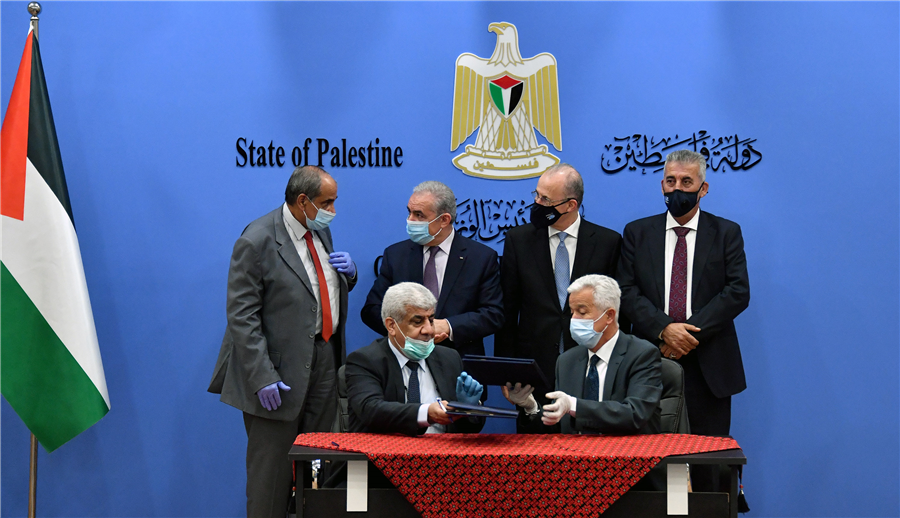 Launching the project of qualification and operation in the field of occupational safety, and quality control for engineers

Prime Minister Dr. Muhammad Shtayyeh: “We are in a very sensitive stage today facing an existential threat to our national project. The annexation is not only related to the Jordan Valley and the imposition of sovereignty over the settlements. Gaza is isolated by the siege, Jerusalem is isolated by the wall, and the Jordan Valley will be isolated by annexation, and there are more than 200 settlements that have 720,000 settlers. "

Shtayyeh added: "All of our struggles will focus on the issue of annexation, and yesterday we saw in the Security Council a broad front against annexation.

This came during his patronage of the effectiveness of launching the rehabilitation and employment project in the field of occupational safety and quality control, which aims to rehabilitate and train 140 engineers in order to enable them to obtain sustainable job opportunities, this was in the presence of the executing and supportive bodies of this project.

The Prime Minister announced the government’s contribution by training 100 other engineers for the project, to become 240 engineers, stressing to the Engineers Syndicate and the partners in the project that the program should include our people in the Gaza Strip and our people in the diaspora.

Shtayyeh said: "The timing of launching this project is important because the issue of engineers and the unemployed of engineers are remarkable numbers. According to the Engineers Syndicate there are 28,000 engineers who are unemployed, and this is a very large number. There are some specializations where there is a high unemployment rate, so I hope that it will be directed Engineering colleges in Palestinian universities should not urge students to go to these specializations, which are practically inconsistent with the job market. "

The Prime Minister added: "The reformulation of the process output is important to us, and I wish the Engineers Syndicate that there will be communication with the deans of the faculties of engineering in the universities in order to return the subject of studies in universities and go to specializations that address these issues."

Shtayyeh explained: "We launched a program a few days ago that has to do with Rephrasing the graduate, and the problem in unemployment lies in the inconsistency between the outputs of the educational process and the needs of the labor market, and accordingly we went to the establishment of a vocational training university so that there are outputs of the educational process in harmony with the labor market."

The Prime Minister continued: "We launched the coding program, and the number of applicants in the first hour of the launch of the program reached 800, and today about 2000 applicants have arrived for this program, and the cost of the program for each trainee is 5,000 dollars, and the government will fund it from 4.5 thousand dollars, we will pay it on behalf of the student, and the rest will bear it The student is for seriousness, and the important thing is that the contracted party will employ everyone who trains in this program. "

And Shtayyeh added: "To raise the level we had launched the Hassib Al-Sabbagh and Saeed Khoury Engineering Award, which is one of the highest awards in Palestine, worth $ 100,000. The main goal was when President Mahmoud Abbas launched it to raise the level of the engineering sector and its projects, and come up with art and creativity with what befits Palestine and engineers. "

Al-Dobeik explained that the project includes three basic stages, starting with the training phase during which the trainees receive three courses in developing personal skills, the ISO9001 course, and a specialized course in occupational safety and health for the construction and industrial sectors, passing through the stage of obtaining the opportunity of training and paid employment for a period of six months, up to The stage of obtaining sustainable job opportunities.

In the speech of the supporting parties, the Chairman of the Palestinian Investment Fund Board, Dr. Mohamed Mostafa: "We meet with partners in one goal, focusing on the importance of qualifying young graduates in order to bridge the gap between what they have learned in universities, and what the labor market needs, and labor institutions in particular. We believe in the need to work with all possible parties in order to reach a better situation in this. "

In turn, President of the General Federation of Palestinian Industries Bassam Al-Wailwil expressed the union's pride in this partnership with the Engineers Syndicate, and looking forward to developing this program, pledging to work to employ engineers in industrial companies.