During his meeting with the Irish Foreign Minister 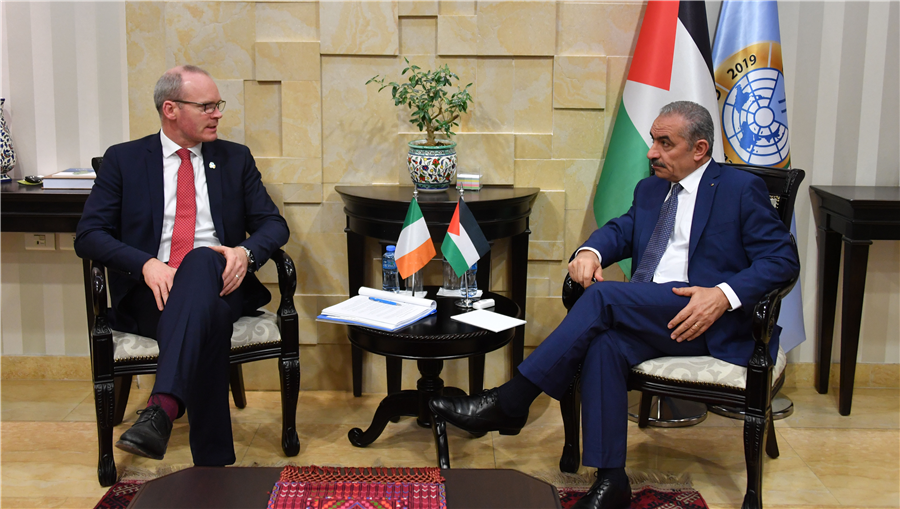 During his meeting with the Irish Foreign Minister

The Prime Minister said at a meeting with the Irish Foreign Minister Simon Coffini on Tuesday at his office in Ramallah today on Tuesday "The world must not be held hostage waiting for the American plan, which may never offer, but the world should think beyond, and recognize the State of Palestine to prevent Israel from escalating its expansionist measures."

shttayeh briefed the minister on the seriousness of the aggressive settlement plans announced by the Israeli authorities this week, whether at the foot of Jabal Mukaber south of Jerusalem, or the settlement to be built on the territory of the Jerusalem airport in Qalandiya, in addition to the new settlement in the wholesale market complex in Hebron. He called for the necessity of placing Israel under international law.

Shtayyeh also rejected the US-Israeli incentives to implement the "status of the century" and perpetuate the status quo in Gaza and devote its separation, such as the American hospital on the Gaza border and the talk about industrial cities and floating islands.

“The Palestinian people do not seek to improve the conditions of life under siege and occupation, instead it has political and national rights on which the world is united and will accept nothing less." he said.

He continued: "We are going to elections to be a gateway to end the division, and restore national unity after the failure of all the agreements signed, and we asked the United Nations and friendly countries to pressure Israel to enable us to hold elections in Jerusalem."