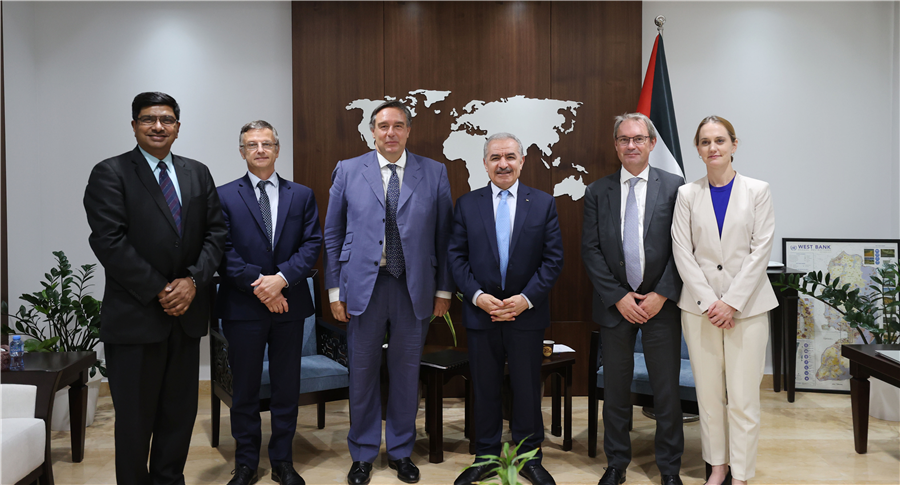 The Prime Minister of the State of Palestine, Dr. Mohammed Shtayyeh, held talks with the Head of Global Infrastructures at the World Bank Group, Vice President, Mr. Riccardo Puliti. The meeting discussed ways of supporting and implementing projects to develop Palestine's Energy sector and Digital Economy, in the presence of the head of the Palestinian Energy and Natural Recourses Authority, Mr. Zafir Melhem, at his office in Ramallah Monday.

His Excellency valued the World Bank's support for many infrastructural projects and projects that contribute to job creation, stating that such projects are based on the principle of partnership, contribute to building the foundations of the State of Palestine, and constitute support for the two-state solution.

Dr. Shtayyeh assured that support for energy sector projects, especially solar power projects, is a part of the government's strategy to gradually break away from occupation and contributes to the diversification of energy sources in Palestine. The Prime Minister discussed the importance of supporting Palestine's digital transformation and the orientation toward digital services and the digital economy, in line with global development, to overcome all the obstacles placed before us by the occupation. He concluded by expressing his gratitude to the World Bank for funding such vital projects in Palestine from international assistance and the Bank's funds.