The Prime Minister and His Italian Counterpart; Joint Efforts and Development 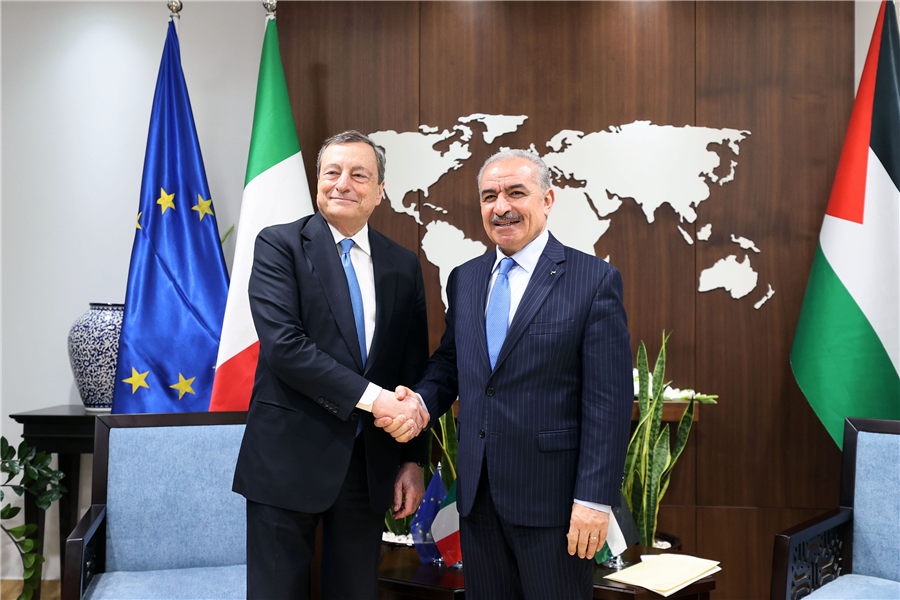 The Prime Minister and His Italian Counterpart; Joint Efforts and Development

The Prime Minister of the State of Palestine, Dr. Mohammed Shtayyeh, held talks with his Italian counterpart, Mario Draghi, at his office in Ramallah Tuesday, in the presence of the Italian Consul Giuseppe Fedele. The meeting discussed the political profile, bilateral relations, enhancing cooperation, the impact of Ukraine's crisis on the two countries, and food security and energy issues.

“I have been privileged to receive the Prime Minister of Italy, Professor Mario Draghi, on an official visit to Palestine. Palestine's relationship with Italy is a long-standing, close relationship based on friendship, mutual respect, respect for international law, and cooperation between the two countries since the 1980 Venice Declaration, which called on Europe's behalf for the right of self-determination of the Palestinian people”

The meeting was followed by a press release, in which the Prime Minister made the previous remarks. The Prime Minister confirmed that he “discussed with the Italian PM issues related to the political situation and the need to fill the political vacuum in the region. Moreover, I briefed him on the Israeli actions, including the ongoing incursions into the Al-Aqsa Mosque and the escalation of illegal settlement construction, colonization, and the terror Palestinian citizens undergo by illegal settlers, as well as the systematic killing of children, women, and journalists.”

His Excellency proceeded, “We called on Italy to jointly work with us to protect the two-state solution and salvage it from the devastation caused by Israel's actions. We hope that Italy will help Palestine to hold the Palestinian elections of the Legislative Council, including the city of Jerusalem.”

The Palestinian Prime Minister further stated, “Italy is a friendly state that provides generous assistance to Palestine, covering all sectors of the economy. Today, we signed (6) agreements worth (17) million euros, including issues related to health, tourism, employment, statistics, and support for the private sector.” Shtayyeh concluded, “Thank you, my friend, Mr. Draghi, for your visit. We greatly appreciate the spirit of cooperation and friendship between our two countries and convey to the Professor the greetings of His Excellency the President, Mr. Mahmoud Abbas, who would have been honored by his visit if he was here.”

For his part, the Italian Prime Minister assured everyone that: “This visit confirms the distinctive relations between our two countries, as well as Italy's commitment to the peace process between Palestine and Israel. We reiterate the need to continue the policy of dialogue, to restore trust. We must continue to reduce tension at all levels and remain united in condemning the violence.” Furthermore, The Italian PM indicated that “This visit is an opportunity to sign (6) development agreements with Palestine covering several areas.”

On the sidelines of the meeting, the six agreements were signed under the auspices of H.E. the Prime Minister. They were signed by the Italian Consul General and the Minister of Finance, Shoukry Bishara, and Minister of Health Dr. Mai Al-Kailah. Minister of Labor, Nasri Abu Jaish, Minister of Tourism and Antiquities, Rula Maayah, Head of the Palestinian Central Bureau of Statistics, Ala Awad, and the General Manager of the Independence Bank for Investment and Development, Mahdi Hamdan were present.