Summary of Key Remarks by Prime Minister Dr. Mohammad Shtayyeh Ahead of the Cabinet 110th Meeting 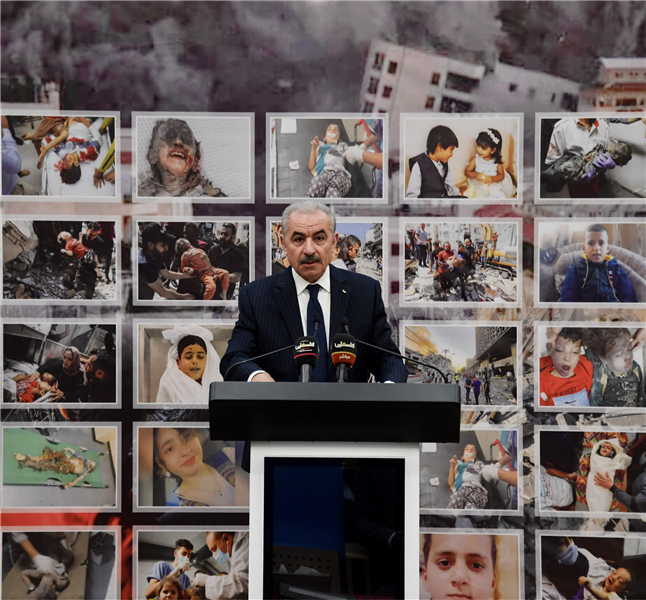 -Israeli occupation authorities perpetrates mass killing and genocide against our children, women, youth, and the elderly in the Gaza Strip while it carries out field executions in the West Bank against those who have risen up to support our people in Jerusalem and Gaza in the face of killings, displacements, and ethnic cleansing policies as well as attacks on the Al- Aqsa Mosque Compound, and the Church of the holy Spechulre, and taboo-infringing.

-These crimes were condemned by most of the speakers in the United Nations Security Council (UNSC) convened twice upon our request for an immediate end to the Israeli aggression against Gaza.

-I salute all statements that expressed support to Palestine. Unfortunately, the UNSC has failed to reach a unified position that condemns the Israeli aggression and puts an immediate end to it. This means that we will head to the UN General Assembly where no country has the veto power to adopt such a resolution.

-The Quartet will convene today for the second time, and the EU foreign ministers will also hold a meeting to discuss the aggression on Palestine.

-It is no longer sufficient to issue statements of condemnation and denouncement. Accordingly:

First: A United Nations resolution must be issued declaring all Israeli measures against our land and people illegal.

Second: There should be punitive measures against Israel, the occupying power.

Third: Friend countries and allies should summon their ambassadors in Israel for consultations, at least to express their rejection of the Israeli aggression against our people.

Fourth: Israeli citizens should be prevented from entering all Arab countries and trade relations/ deals with Israel should be halted.

Fifth: Any international aid to Israel, especially from the United States and Europe, should be linked to Israel's respect of human rights.

-Brutal Israeli raids have killed entire families while their homes were demolished over the heads of their children, and left behind death, terror, destruction, remains in the rubble of destroyed buildings and ruined streets. These bloody scenes and pictures of children whose clothes were dripping in blood when they lost their lives are the biggest crimes punishable by international law.

-The world cannot ignore the programmed/ systematic crimes that are broadcast live. The International Criminal Court (ICC) monitors the situation and it must expedite its proceedings. Further delays in ending the ongoing aggression means renewing the license for killings conducted by Israel against our people, which must immediately stop.

-At the direction of H.E. President Mahmoud Abbas, and since the start of the aggression, I have asked all ministries to accelerate the provision of medical and relief supplies. We are working along with our Egyptian brotherns and international humanitarian organizations to secure the immediate entry of these supplies. Our contacts with Egypt and Jordan also focused on facilitating the transport of aid sent to the Gaza Strip with special arrangements to open The Rafah crossing, especially to treat the wounded. Accordingly,  drugs, medical supplies and equipment are being prepared today to be dispatched to Gaza. Around 1,000 blood units donated by citizens in the West Bank will also be sent to Gaza along with a medical delegation of specialists, who will help in saving the lives of our people there. We also asked the UNRWA to meet the needs of shelters used for citizens whose homes were demolished.

-We are closely monitoring the situation, and we call upon the international community to intervene and stop the aggression, but Israel has not respond to anyone yet.

-I salute all nations that have risen up in Arab and international countries in solidarity with our people against the aggression. All global solidarity delivered a message, which asserted that the Palestinian Question is always present in the minds and hearts of the world’s nations and governments, and that it tops the priorities of global political and diplomatic activity. The message also confirms that Palestine is the core/ center of the conflict, peace and war. In addition, it clarifies that Israel cannot combine its occupation and crimes against us with having peace and security for free.

-On the 73rd commemoration of the Nakba, it becomes clear that the world should advance a political project for a solution that is based on international legitimacy and law in order to end the occupation and establish an independent State of Palestine, with Jerusalem as its capital and the right of Palestinian refugees to return.

-Today, our people embody the unity of geography, identity, pain and suffering. Despite the occupation's attempts to obliterate the identity, falsify the history and split the geography, we will defeat this injustice that will not last.