During the lighting of the Christmas tree in Ramallah 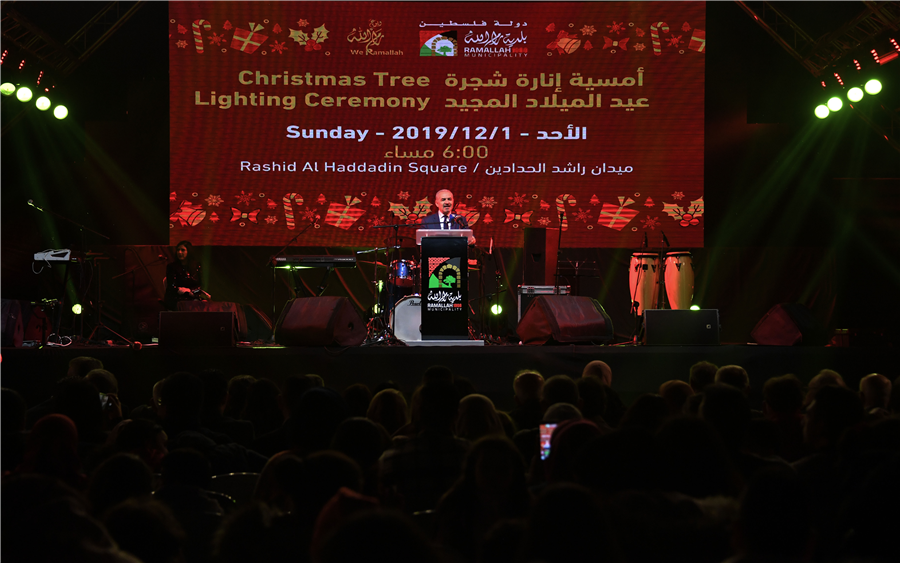 During the lighting of the Christmas tree in Ramallah

Shtayyeh: We want the Christmas tree to radiate joy to the world

shttayeh: The unity of the land and the people is the title of this homeland

The Prime Minister said: Mohammed shttayeh: "The Christmas tree means a lot to us, this tree from which the spring of love has sprung up and flooded the world and human beings, and Christmas is a national holiday for all our people."

This came during the lighting of the Christmas tree in the city of Ramallah, on Sunday, in the presence of the Governor of Ramallah and Al-Bireh Laila Ghannam, and the President of the Supreme Presidential Committee for the follow-up of church affairs Ramzi Khoury, a number of members of the Executive Committee of the PLO, ministers, Muslim and Christian clergy, mayors and a large crowd Of citizens.

Shtayyeh  added: “In the name of President Mahmoud Abbas, I congratulate you and I wish you a happy holiday. Let this joy be for us all.

He added: "It is a great pride that Palestine is the land to which our Prophet Muhammad was captured from the land of Hijaz to limp to heaven, and that it is a great honor that Jesus was born here, who from this land spread light on the world, Palestine was the meeting point between our Prophet Muhammad and our Lord Jesus Christ. Our national unity is complete when we see our Christian parents in Gaza taking part in Christmas celebrations in Bethlehem. "

The prime minister went on to say: "We are running for elections soon and we hope that this will be an entrance to end the division. We hope that this scene will be completed by a real and serious national wedding. "The religious light is on the way to complete the national light to become Jerusalem as the capital of the state of Palestine as it always is."

He explained: "President Mahmoud Abbas launched the project of restoration of the Church of the Nativity which is in its final stages and on the way to completion, The President is keen on this religious, historical and heritage landmark for all of us.

The prime minister concluded: "Palestine is a land of coexistence, a land that shines light and today we light the Christmas tree. We want it to radiate joy to the world, and we want it to be a light in the graves of martyrs and a light in the cells of prisoners and for all of us. "