EGYPT, 23RD DAY OF JULY 1952: THE REVOLUTION, THE INSPIRATION, THE POSITION 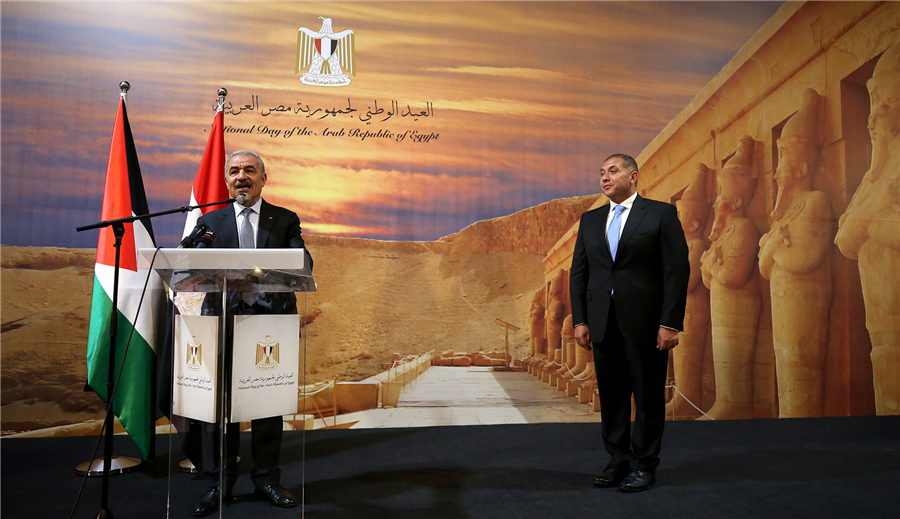 EGYPT, 23RD DAY OF JULY 1952: THE REVOLUTION, THE INSPIRATION, THE POSITION

The Prime Minister of the State of Palestine, Dr. Mohammed Shtayyeh commencement his speech stating: “Palestine and Egypt agree on strategic issues related to Palestinian legitimacy; the end of the occupation, the establishment of an independent State of Palestine, the Palestinian political parties reunion mechanism, and Gaza's return to Palestinian legitimacy. Our people today pursue resistance and perseverance paths in their land to counter the occupation that targets the Palestinian land, life, and identity. The July Revolution inspired the Palestinian struggle for freedom, self-determination, and the establishment of an independent state with Jerusalem as its capital on June 4, 1967 borders, and the right of refugees to return in accordance with resolution No. 194.”

At a ceremony organized by the Egyptian Embassy in Palestine Monday in Ramallah, on the national day of the Arab Republic of Egypt, in the presence of the Egyptian Ambassador to Palestine, Mr. Tariq Tayel, several members of the executive committees of the Palestinian Liberation Organization and the Central Committee of the Fatah Movement, members of the diplomatic corps accredited to the State of Palestine and a number of officials, religious, security and legal figures. The Prime Minister further stated: “It is my pleasure to extend our congratulations, on behalf of the Palestinian people, to His Excellency the President, Dr. Mahmoud Abbas, and my brothers in the Palestinian leadership present to the brotherly Egyptian people and Egyptian leadership, foremost among them, His Excellency, Mr. President Abdel Fattah El-Sisi, and His Excellency the Prime Minister, Mr. Mustafa Madbouly, on the seventieth anniversary of the July glorious revolution.”

JULY 23RD: THE REVOLUTION AND THE REPUBLIC

Dr. Shtayyeh proceeded, “This revolution changed Egypt and the Arab world and affected the region and the world. The revolution restored hope for the independence of Arab decision-making, the inevitability of victory, and the ability of our Arab peoples to liberate, build, and distinguish. His Excellency, The late President, Mr. Jamal Abdel Nasser, a symbol of national dignity and pride, a pioneer of the social justice system and pro-poor bias, and always a champion of the Palestine cause, under his role and auspicious, the Palestinian Liberation Organization (PLO), was established. In that period, under Nasser's auspicious, Egypt regained its political and economic independence, grew significantly in all social, literary, and intellectual spheres, and was devoted to freedom and social justice. Such devotion created a shining example for all peoples seeking freedom and independence, particularly the Palestinian people, in their ongoing battle for freedom.”

His Excellency the Primer expressed, “The unity of purpose, destiny, and blood between the Palestinian and Egyptian brotherly peoples at all points of the national struggle has made the relationship even stronger, more durable, and more entrenched. The unity made our struggle common against; injustice, persecution, discrimination, and ethnic cleansing. We thank the brothers in Egypt for their political support for the Palestinian cause and their efforts to achieve national reconciliation, reconstruction, and development of the Gaza Strip. We welcome the firm Egyptian position expressed by Mr. President Abdel Fattah El-Sisi at the Jeddah Summit in the presence of the President of the United States. The establishment of the State of Palestine is the first step in response to the region's crises, which will open up prospects for peace and stability and intensify joint efforts to make the peace process a success.”

Dr. Shtayyeh indicated that: “U.S. President Joe Biden's visit to Palestine and the region was important in terms of reaffirming the two-state solution, as well as renewing the firm Arab position on the matter of Palestine, which was reflected at the Jeddah Summit, but we are awaiting serious results and real pressure to be brought on Israel to halt its illegal settlement expansion and its actions destroying every possibility for embodying the State of Palestine on the ground.”

“AS CAIRO’S NIGH TO HER NILE

AS GAZA’S NIGH TO HER SEA”

The Prime Minister concluded by adding, “The fearful cannot be free. Therefore, liberation and revolution ideologies, the path to justice, the end of the occupation, the right to self-determination, and human dignity will always be our common denominators with Egypt, the Arab world, and the world that believes in peace and justice. We commend the brave, brotherly Egyptian people who have remained supportive of Palestine and loving of its people. We hail the Arab Republic of Egypt and its youth on Egypt's Day and National Day. The fraternal Egyptian people will remain close to the Palestinian people, as close as Cairo is to its Nile, as close as Gaza is to its sea.”

HIS EXCELLENCY, TAYEL, THE AMBASSADOR OF EGYPT

For his part, His Excellency, the Egyptian Ambassador to Palestine, Mr. Tariq Tayel, said: "The revival of the peace process will continue to be a shared Palestinian-Egyptian goal. During the past period, communications between the two sides were not interrupted. Egyptian contacts with international and regional factors were not interrupted, including the side meetings held on the sidelines of the Jeddah Summit two days ago. Last year saw the operationalization of the formula of cooperation and coordination between the three brothers: Egypt, Jordan, and Palestine, to deal with the current challenges. In this context, a tripartite summit was held in Cairo last September, bringing together His Excellency the President, Mr. Mahmoud Abbas, and his two brothers, His Majesty, King Abdullah II, and Mr. President Abdel Fattah El-Sisi. This tripartite coordination will continue to be pivotal in the coming period to take stock of recent developments and meetings in the region and to develop a common vision of how to build on their results and move forward together.”