In Solidarity, For Peace, Justice, and Human Rights; The Prime Minister, “Welcome to Palestine” 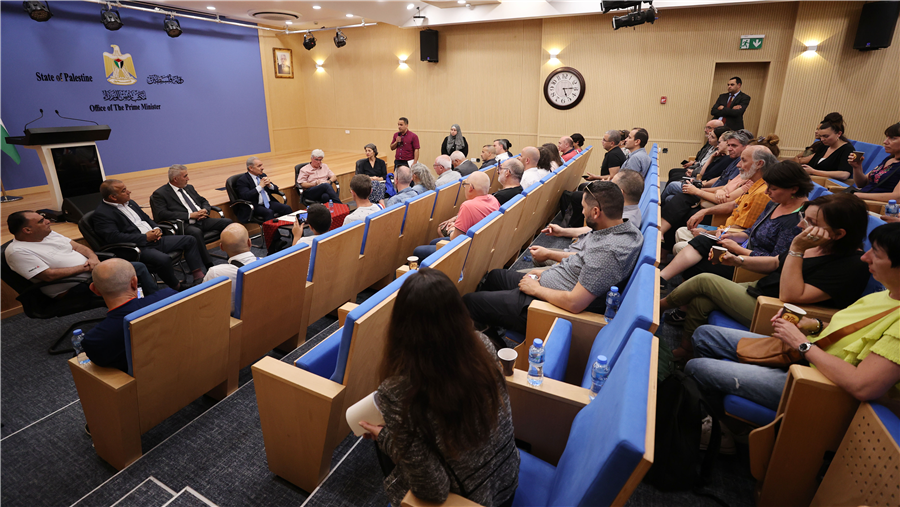 In Solidarity, For Peace, Justice, and Human Rights; The Prime Minister, “Welcome to Palestine”

The Prime Minister of the State of Palestine, Dr. Mohammed Shtayyeh, welcomed a delegation of French mayors and several activists in solidarity with Palestine. Monday, at his office in Ramallah, Dr. Shtayyeh briefed the delegation members on the recent political developments, the situation in Palestine, and the Israeli occupation violations against the Palestinian people.

“Your visit to Palestine; to see the conditions in Palestine, and the sufferings of the Palestinian people, especially in the refugee camps from the ground, is significant, as is your solidarity with Palestine and the Palestinians for peace, justice, and human rights.”

His Excellency made the previous remark and proceeded to call on the delegation to work with the Government of France to recognize the State of Palestine in order to preserve the two-state solution, emphasizing the importance of transitioning from marking Israeli settlement products to boycotting them. The Prime Minister expressed his appreciation for the delegation's efforts to hold twinning between a number of French cities and Palestinian camps in the West Bank and Gaza Strip for its important message.