“Defiance and Resilience” Conference; The 18th Government's Projects in the Face of Displacement and Land Seizure 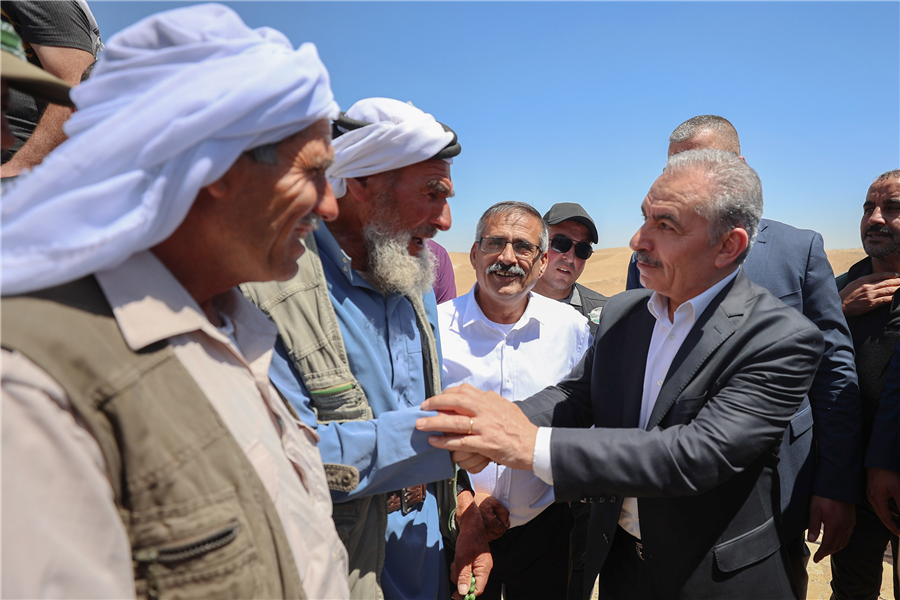 “Defiance and Resilience” Conference; The 18th Government's Projects in the Face of Displacement and Land Seizure

“We are not here for speeches. We have a message from H.E. The President, Mr. Mahmoud Abbas, from the Palestinian National Factions, the Central Committee, and all the honorable people of Palestine for our persistent and steadfast people in Musaffer Yatta, Al-Badiya, and everywhere.”

At the Heart of the Desert

The Prime Minister of the State of Palestine, Dr. Mohammed Shtayyeh, made these remarks during the opening of the conference “Defiance and Resilience,” which was held under the auspices of the President of the State of Palestine in Khirbet Al-Majaz in Musaffer Yatta, on Sunday. The conference was attended by members of the executive committee of the PLO and the Central Committee of the Fatah Movement, the Governor of Hebron, the Chairman of the Colonization & Resistance Commission, members of the National Council, and Directors of the Security Institution, and a number of notable members of Palestinian Tribes.

The Prime Minister further stated, “The populace, here today, in Al-Majaz, Al-Badiya, and Musaffer Yatta is the earnest and genuine response to the Israeli Occupation’s schemes, land seizure, and actions. These masses are a message; Peace in the region cannot be achieved; in the absence of a political path to end the Occupation and protect the rights of the Palestinian Arab people.”

His Excellency proceeded, “We in the government are a central component of resistance to occupation. This government is not only a government that provides services. We are an integral part of the anti-occupation movement in every possible aspect. When we provide a service to our citizens, we want to consolidate their steadfastness. We want this service to support Palestinian resistance in the face of Israeli occupation.”

Shtayyeh indicated that the Government provided support to (385) families through the cash transfer program and assisted (462) families by providing health insurance and various economic empowerment projects through three institutions and associations. The Palestinian Government will establish and provide tents and houses for families in need of shelter, provide In-kind and food packages assistance for (400) families, (150) school bags for children, networks supporting women, and (10) women workshops will be held.

Furthermore, the Prime Minister said that the Palestinian Government will provide monetary assistance to (270) families that have people with disabilities, generators for Musaffer Yatta, and Khirbet Al-Tuwani will be equipped with electrical cables. Moreover, the Government will prepare developmental and spatial frameworks along with a structural blueprint to cover an area of (36) thousand dunums in the Musaffer Yatta area and (10) individual structural blueprints covering (12) gatherings in Musaffer Yatta. Updating the structural Chart consolidates the Palestinian steadfastness on the ground. Therefore, we greatly need it.

Dr. Shtayyeh added, “There's $ 130 thousand in road paving and $136,000 for asphalting agricultural roads, and NIS 105 thousand in Governmental support for the Council's balance.” In the Agricultural sector, he said, the Government will supply productive, forestry, and pastoral tree seedlings, the Green Palestine Project, and the distribution of drought-resistant agricultural seeds on lands to (450) beneficiaries.

The Prime Minister referred to the Government’s contribution to the rehabilitation of over one kilometer of water carrier lines in Khirbet Janbah and the rehabilitation of 5 kilometers of water carrier lines in Khirbet Al-Rakiz. With regard to communications, the Ministry of Telecommunications and Information Technology developed scenarios to provide phone reception in these areas, held meetings with the telecommunications company operating in the area, and discussed scenarios and the mechanism to cover the area. Moreover, the Ministry of Labour and the Ministry of Health provided free health insurance for the unemployed, counseling services, awareness-raising, guidance, and licensing of charities, among others.

The Prime Minister continued, “We will distribute field seeds, agricultural equipment, two agricultural tractors, two tractor-trailers, two plows, and two threshings in Yatta and Musaffer Yatta at a cost of $200,000. Moreover, the Ministry of Agriculture will provide an excavator with a value of $93 thousand for the benefit of all farmers in the region and distribute 5 thousand fruitful seedlings totaling $17,500, plus (2,500) foresty and pastoral seedings distributed all over the area's gatherings. The government will rehabilitate 200 dunums of agricultural land at a cost of $ 160 thousand and construct and rehabilitate agricultural roads for $ 140 thousand in Yatta.”

Regarding livestock, Dr. Shtayyeh pointed out that the Ministry of Agriculture will establish a livestock slaughterhouse in Yatta City worth $1 million for the benefit of Yatta and Musaffer Yatta. The Government will build a livestock market in the city of Yatta with a cost of $600 thousand to serve Musaffer Yatta and Al-Badiya, and create a pastoral reserve on 300 dunums of land with a value of $200 thousand. Furthermore, we will distribute genetically modified rams to improve the productivity of milk and meat and genetically modified lambs with an estimated cost of $1 million to benefit all gatherings in Musaffer Yatta, Bedouin communities, and all livestock breeders in the region.

The Government, he said, will distribute (185) tons of forage to (185) livestock farmers at a value of $115,600, part of which will be distributed in Khirbet Al-Majaz and Um al Kher, and the distribution of the remaining portion will be completed. Moreover, the PA will rehabilitate 30 barns of the livestock sheds, which will be distributed in parts of Musaffer Yatta’s gatherings in Khirbet Janbah, Tuba, Maghayir Al 'Abeed, and Shi'b Al-Batin, costing $90,000.

The Palestinian Government, the Prime Minister added, will also distribute 90 sunshades for animal barns in several gatherings in Musaffer Yatta at a cost of $180,000 and vaccinate livestock against smallpox, plague, foot, and mouth fever, and Maltese fever, part of which we have already implemented, and we will complete the vaccination process. The competent authorities will distribute food processing equipment to 90 beneficiaries, including stainless steel milk preservation blinders, numbering machines, scissors, veterinary treatments, and Trompe worth $45 thousand.

At the Local Government level, the Prime Minister indicated that local structural charts for Musaffer Yatta gatherings were provided to the occupation authorities on May 6th, 2022, and an amount of NIS 50 thousand was allocated to support the budget of the Musaffer Yatta Council for 2022. The Ministry will also rehabilitate and pave the roads of the so-called (c) areas, valued at NIS 400 thousand from the Ministry's development budget, and provide water tanks and tractors at an estimated cost of NIS 275 thousand. In the economic sector, a sum of NIS 200 thousand was allocated to support 50 micro-projects by providing equipment and training to entrepreneurs.

In the healthcare sector, the Prime Minister of the State indicated that the government provided four fixed Clinics and two mobile clinics and will provide an emergency center in the area. In the water sector, Euro30,000 was allocated to the Musaffer Yatta council to provide technical support, capacity-building, training, rehabilitation, and replace the main water carrier line to Musaffer Yatta. He pointed out that the study on lost and unaccounted water in the Musaffer Yatta area and Khirbet Al-Tuwani, costing EUR 7,500, will be implemented to identify the necessary actions. During tomorrow’s meeting of the Council of Ministers, he said, "We will discuss water supply for the Musaffer Yatta area to enhance the steadfastness of the people because the conflict here is mainly on land and water."

The Ministry of Telecommunications and Information Technology, Dr. Shtayyeh explained, will connect Internet service to all schools in the area, open exhibition branches for telecommunications companies in Yatta, and open a post office in the region. Youth will participate in IT training courses and summer camps, and the ministry will support training courses designed for school students in the IT field. Moreover, in the energy and natural resources sector, the Musaffer Yatta population will be supplied with solar power units, and a project to deliver power in Khirbet a-Duqaiqah, at a value of NIS 1,700,000, which will be implemented in two phases starting this year.

In the social welfare and empowerment sector, the Prime Minister stated we would continue to support families in need through cash transfers and the provision of additional health insurance and support services. Regarding employment, the government will provide free insurance services to the unemployed, and we will continue to provide guidance and direction. For its part, the Ministry of Public Works will implement 15 km of roads and rehabilitate 50 homes as a first stage. There are more than 300 caves where Palestinian people live in the Musaffer Yatta and Al-Badiya.

His Excellency expressed his hope of a special program to qualify these places to be inhabited. Dr. Shtayyeh said there are four schools in Isfiya Al-Fouqi, Isfiya Al-Tahta, Maghayir Al 'Abeed, Tajamo' Hawara, and Khashem al Karem that have yet to open. There are two kindergartens as well. The government will expand the vocational training center at a cost of NIS 1.4 million, and all the project funds are already allocated for the projects we have announced.

The Prime Minister concluded by saying, “We are here today to hail the steadfastness of the people; disgrace shall be on the Occupation. Our presence is to consolidate the Palestinian people's steadfastness, end the Occupation, and be a thorn in Illegal settlers and settlements.”