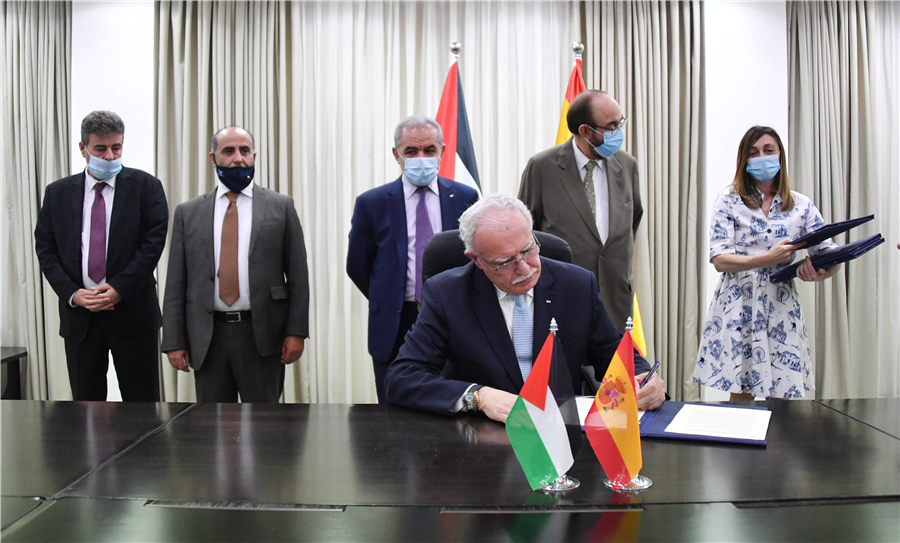 The signing of a Spanish support agreement worth 100 million euros

Shtayyeh: Spain and the countries of the world support us with a message of support and rejection of occupation and annexation

Under the auspices and presence of the Prime Minister Dr. Muhammad Shtayyeh, the Palestinian government was represented by the Minister of Foreign Affairs and Dr. Riyad Al-Malki, and the Spanish government represented by Foreign Minister Arnacha Gonzillas Laia, via video conference, a memorandum of understanding defining the prospects for development cooperation between the two countries at a value of 100 million euros for the years 2020-2024.

The signing of the agreements was attended by the Palestinian Minister of Agriculture Riyad Al-Atari, the Palestinian ambassador to Spain, Kifah Odeh, and the Spanish consul to Palestine Ignacio Valdicas.

The Prime Minister said: "This agreement signed today, and the  Spanish support, like many countries in the world, constitutes a message to Israel and the United States that the world stands with Palestine and supports it in building state institutions, on the way towards ending the occupation and promoting peace and stability in the region."

Shtayyeh added: "The sectors covered by the Memorandum of Understanding are important to us at this time, in line with the government's plans in the development of these sectors."

The Prime Minister continued: "We hope that Spain will lead the European Union and break the de facto situation by recognizing the Palestinian state with Jerusalem as its capital on the 1967 borders, and imposing sanctions on Israel in the face of the annexation plans."