During the third forum of the Palestinian-Italian Business Council 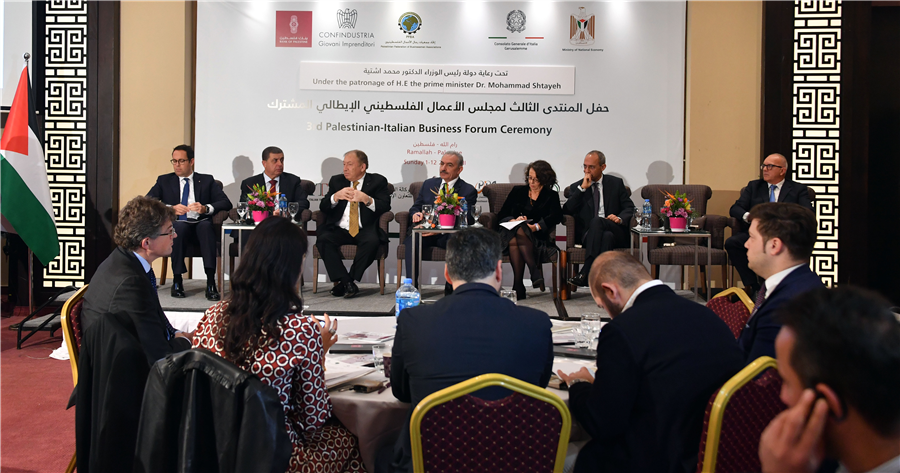 During the third forum of the Palestinian-Italian Business Council

shttayeh: Investment potential in Palestine is high despite occupation

The Prime Minister d. Mohammed Shtayyeh: "The investment potential in Palestine is high, even though we are under occupation, through the laws enacted by the government, which encourage investment, whether in the Investment Promotion Law or the Companies Law."

"The trade balance between Palestine and Italy has increased since the beginning of the year, and our direct import from the world has increased by 16% at the expense of imports through Israel," shttayeh said.  pointing out that "this important forum, which includes 51 personalities of the elite Italian businessmen, to meet with the Palestinian business elite, shows that Palestine is open to business initiatives, in addition to the investment climate is encouraging."

The Prime Minister added: "The government's strategy is based on strengthening the national product, and we are looking to strengthen partnerships with the Palestinian private sector, in order to consolidate the strategy on which the government builds; that is to break with the occupation, to go to the world, and to open markets for us in various countries of the world."

"There are 14 banks in Palestine, and $ 14 billion in deposits, There are very promising economic sectors, especially in agriculture, industry, pharmaceuticals and information technology, in addition to tourism projects that are very profitable Where almost Three million tourists visited Palestine last year, Now all hotels are full of tourists in and around Bethlehem”. he said.

The prime minister concluded: "We went to Arab countries, and we will have a visit to Saudi Arabia very soon, and there will be a Qatari ministerial delegation here as well. We declare that despite the difficult circumstances we are in, businessmen can come here and make profitable investments