H.E. Dr. Ishtayeh During his speech at the ceremony commemorating the 15th anniversary of the martyrdom of President Yasser Arafat 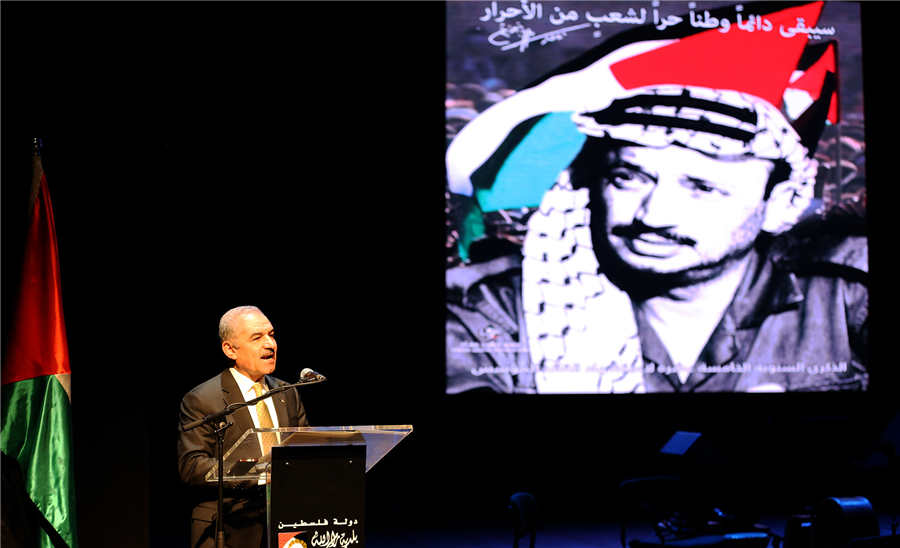 H.E. Dr. Ishtayeh During his speech at the ceremony commemorating the 15th anniversary of the martyrdom of President Yasser Arafat

Shtayyeh: Fatah is invoking today to the people and the entrance to ending the division is democracy

The Prime Minister Dr. Ishtayeh. "The Fatah concept of democracy is simple and it is the homeland for all and everyone who abides by it. Yasser Arafat did not graduate from a school to liquidate his opponents, but graduated from a school that distinguishes between the enemy and the friend, between the main and secondary contradictions."

This came during his speech at a ceremony commemorating the fifteenth anniversary of the martyrdom of President Yasser Arafat, which was organized by the Yasser Arafat Foundation, on Sunday, in the Ramallah Cultural Palace in Ramallah, in the presence of the Chairman of the Yasser Arafat Foundation Dr. Nasser al-Kidwa and a number of members of the Executive Committees of the PLO and the central movement of Fatah, and personalities and legal persons, clerics, ambassadors and consuls of a number of countries.

The Prime Minister continued:”Fatah, which established democracy in a jungle of guns, now appeals to the people through what President Abu Mazen put forward that the way to end the division is electoral democracy, to go to elections and to stop the absurd debate that did not lead us to ending the division."  Along with Fatah, embodies the Palestinian National School under the umbrella of the Palestine Liberation Organization, which Abu Ammar rightly called the democracy of the forest of guns.”

Ishtayyeh added: "Achieving our unity under the roof of parliament will enable us to face the colonial policies waged by Israel, and the Fatah movement today in a state of repression and steadfastness and construction, and we are its government is leading the struggle against the Zionist colonial project and face its policy, which is building society and struggling to end the occupation and grab the right to establish an independent Palestinian state based on international standards and human values ​,​ a state for all free citizens. "

However "With the political horizon clogged, the strategy of gradual disintegration of the economy and services paves the way for the economy to be a lever for politics and keep the spirit of engagement with the occupation alive, with the necessity of accompanying popular resistance and paying the occupation the price of its crimes until it is defeated." "The world, especially the friendly European and Arab brotherly countries, are required to prepare for the post-failure of the deal of the century, on the basis of international law and international legitimacy, and within the framework of an international conference after bilateral negotiations failed to end the occupation."

He added: "The philosophy of third party participation in the political process came to bridge the gap in the unbalanced relationship between the occupier and the reality under occupation, at the negotiating table. This third party, which has always been an American bias towards Israel, has always made the negotiation table more unbalanced Therefore, it is important to break Washington's monopoly on the political process and replace it with an international conference. "

The Prime Minister concluded: "We have learned from history that the leader holds a candle to light the way for his people; There is a leader holding a mirror that reflects the candle light. Arafat held the candle and the mirror together.