The Prime Minister and The European Commission President Meeting: Politics, Aid, Food Security, and Energy To The Forefront 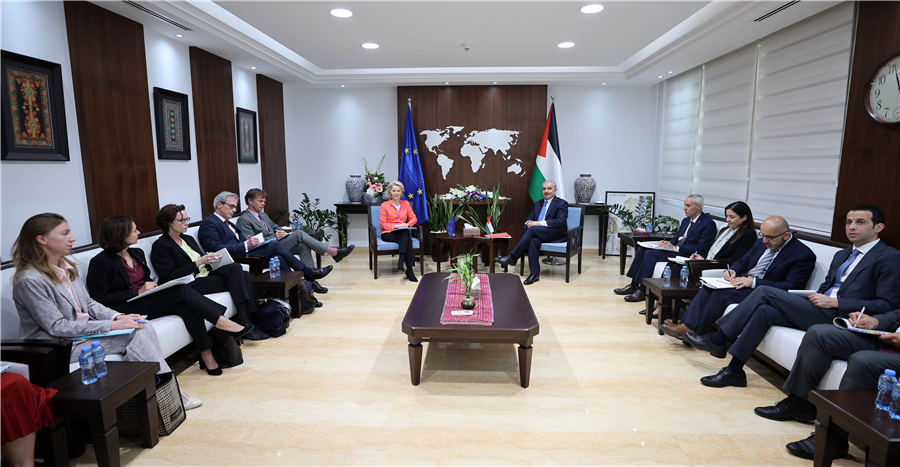 The Prime Minister and The European Commission President Meeting: Politics, Aid, Food Security, and Energy To The Forefront

The Prime Minister of the State of Palestine, Dr. Mohammed Shtayyeh, held talks with the President of the European Commission, Ms. Ursula Von Der Leyen, at his office in Ramallah Tuesday, in the presence of the European Union's representative in Palestine, Sven Kühn von Burgsdorff.

The meeting discussed the Palestinian political dossiers, the EU support, and Joint action to address the consequences of the Ukraine crisis on food security and energy.

“Pleased, I am, to welcome the President of the European Commission as she visits Palestine. Europe, Palestine's Mediterranean neighbor, and a partner in Mediterranean security and natural gas”

The meeting was preceded by a press release, in which the Prime Minister made the previous remarks. The Prime Minister affirmed the Palestinian government's “Endeavors for peace in the region, the end of the occupation, and the embodiment of our independent Palestinian state, with Jerusalem as its capital and the right of return of refugees on the basis of international legitimacy.”

His Excellency called on Europe to utilize its economic pressure and relationship with Israel in order to halt the proceedings destroying the ‘two-State’ solution. Mohammed Shtayyeh made clear the position of Europe as “A partner for peace and justice in the region, standing for international law, international legitimacy, human rights, and democracy. Since the 1980 Declaration of Venice, Europe has stood with us for the legitimate rights of the Palestinian people. Nowadays, we need a political initiative to end the occupation, stop illegal settlement construction, and protect the sanctities.”

Indicating the vital role of Europe and its position, the Prime Minister further stated, “Europe is Palestine's main contributor, whether the Member States or the commission.” Dr. Shtayyeh “expressed his gratitude for Europe's unconditional resumption of support, for the assistance Europe provides and what Europe will provide to maintain the Palestinian civilian and security institution. The European aid covers various sectors, such as the West Bank, Gaza Strip, the So-Called (C) Areas, and Jerusalem's infrastructure. Moreover, they include technical and policing assistance, supporting the private sector and civil society, and subsidizing the difference in prices resulting from the Ukraine crisis.”

The Palestinian Prime Minister called on Europe to bring pressure to bear on Israel to permit the general elections to be held in Palestine, including in Jerusalem. He concluded, “Raised in every village, city, and camp in Palestine, the flag of the EU represents friendship with Palestine and the Palestinian people.”

For her part, von der Leyen said, “I am pleased that EU funds for 2021 can now be promptly disbursed.” The meeting touched upon the European Union's support for Palestine and the Palestinian people, estimated at 600 million euros annually, primarily for projects in Gaza and the West Bank.

Ms. von der Leyen confirmed that the disbursement of aid is vital since the EU funding supports people, especially those most in need. It enables the creation of appropriate conditions for economic opportunities. Moreover, the meeting addressed the impact of the Ukrainian crisis on food prices, food supply, and the peace process.

The EU welcomes all efforts to achieve peace and remains committed to the reached 'two-State' solution. The Two-State solution provides the Palestinian people, especially the youth, with the same rights and possibilities as others in the region and an independent, democratic, and viable Palestinian state living side by side in peace with Israel. Finally, I would like to express my sincere regret for Shirin Abu Akile's death. The EU strongly condemns the murder of the journalist Shirin Abu Akile. We call for a comprehensive and independent investigation.