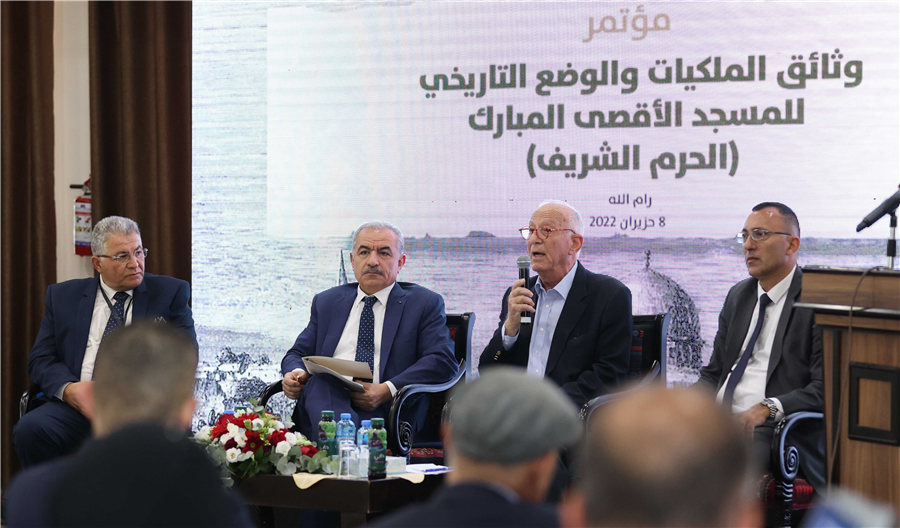 Faithful to the City

The Prime Minister of the State of Palestine, Dr. Mohammed Shtayyeh, assured Palestinian citizens that “From The Covenant of ʿUmar to the National Contingent, we will remain faithful to Jerusalem, its people, institutions, and Islamic and Christian sanctities.”

Dr. Shtayyeh stated that “When His Excellency the President said ‘Jerusalem cannot be compromised on,’ he knew, for a fact, what the so-called Deal of the Century schemes was.  The Deal intended to replace the City of Jerusalem, as Palestine’s capital, elsewhere.” The Prime Minister further stated, “Let me state for the record my gratitude and appreciation to all those helping us, Jordan primarily, and our brotherly Arab and Islamic countries, since we all have a collective responsibility for this city.”

The Prime Minister made those remarks at the conclusion of the conference under the theme, "Property Documents and Historical Status of Al-Aqsa Mosque," held Wednesday at the headquarters of the Red Crescent Society in Al-Bireh city. Furthermore, he stressed that the Government would put the Conference outputs on its agenda and take decisions on all recommendations, hoping to convene regular conferences and address specific issues in this regard.

The Prime Minister Proceeded, “Everything related to Jerusalem is the thrust of our strategy in dealing with the Israeli occupation. H.E. Mr. President Mahmoud Abbas, who addressed you today, emphasizes day and night that Jerusalem is our Crown Jewel, the backbone of our national project, and our capital throughout history, present, and future state. An unparalleled City in history, a city where our Prophet Muhammad (PBUH) prayed before all the Prophets, and the City from which he transcended to Heaven.”

The Prime Minister expressed his gratitude to those who prepared for and attended this important conference. A conference, he said, “that confronts one of the most important wars Israel is waging on Palestine; the war of the narrative.”

His Excellency, the Prime Minister, valued the holding of this conference at this very time, “when Israel is practicing the most heinous falsification of facts and history, not only in Al-Aqsa mosque but also to the Church of the Holy Sepulchre and the city itself. Israel is working to falsify history, change the facts on the ground and create new realities as if the Palestinians have no history.”

With Regard to history falsification, Shtayyeh further stated, “An Israeli day-to-day systematic falsification of the Palestinian Islamic and Christian narrative about Palestine. Historical facts prove to us every day that we are deep-rooted in Jerusalem. Nobody can question the Palestinian presence from the Canaanites to this day, since the very first day the city was built. Both Palestinian Muslims and Christians believe God has honored us with the privilege of being faithful to Jerusalem and its rightful inhabitants.”

Furthermore, the Prime Minister noted, “The existence of a current political impasse in the absence of an international initiative. On the contrary, if there is an international initiative with a political horizon, Ukraine's crisis and the decline in the role of the international quartet, etc., interrupted it. Under such circumstances, Israel is practicing systematic brutality, trying to proliferate its internal crisis through a series of attacks on us, a series of wars that Israel wages on us daily, to undermine our determination, to seize our land and our beloved Jerusalem.”

The Hashemite Kingdome of Jordan

The Prime Minister pointed out the "unprecedented coordination between His Excellency Mr. President Mahmoud Abbas and His Majesty King Abdullah II of Jordan to stand for Jerusalem in an international battle. His Majesty the King's great interest is not only in the subject of Hashemite trusteeship but also in the Palestinian State with Jerusalem as its capital. Therefore, Mr. President is in constant contact with His Majesty to preserve Islamic and Christian religious sanctities. We commend His Majesty the King and Mr. President for their enduring steadfastness and guidance. Palestinian national powers are therefore required to rise to the challenge posed to us by Israel."

“Palestinian-Jordanian coordination at the highest level; a daily practice for the protection of sanctities rather than signed agreements solely”

Shtayyeh explained, "When we speak of Jerusalem's historical status, we know what that means. We want the city's historical status to continue until the end of the Israeli occupation. Hence, Palestinian-Jordanian coordination at the highest level is a daily practice for the protection of sanctities rather than solely operating under signed agreements. Israel wants to dominate the Al-Aqsa mosque compound and convert the Al-Aqsa Mosque into a synagogue."

“Israel has been unable to prove that it has any history whatsoever in the city of Jerusalem despite all the excavations that have taken place under the city throughout history, despite 55 years of excavations and tunnels that have not demonstrated the presence of a so-called ‘Temple’ in Jerusalem”

The previous comments of the Prime Minister confirmed the illegal actions of the Occupation. His Excellency added that "this conference is vital to enhance the Palestinian narrative and confront the devious Israeli narrative about Jerusalem in the face of the systematic falsification of Palestinian history and the Arabian Christian and Islamic presence in the city."

The City of Jerusalem

“Jerusalem needs its citizens, 127,000 displaced Jerusalemite citizens up to now. We have to start going back to the heart of the city of Jerusalem”

"Under the guidance of H.E. the President, we had a clear position to encounter the reconciliation project launched by the occupation government in the city of Jerusalem. We asked our people not to cooperate at all with this project. The Israeli occupation government wanted to dispossess Palestinian properties under the so-called absentee property law," H.E. the Prime Minister explained.

The Palestinian Prime Minister proceeded to say, “These days, Israel is trying to reframe the perspective of Jerusalem's city center to create a distorted narrative of the city. I hope Arab donors will not be part of the Judaization of the city. There are well-known bodies to turn to for those who want to help the people of Jerusalem, absolutely not through joint projects with the occupation but through enhancing people's resilience as much as we can and protecting the institutions of Jerusalem.”

Dr. Shtayyeh concluded by indicating that “Neighborhoods across Jerusalem are targeted. The occupation moves from one square block to another. We are encountering this by restoring the Old City and its yards, assisting its people to stand firm, strengthening institutions, and enhancing the resilience of traders. We need to enhance Palestinian resilience on the ground. An Arab, Islamic, and Christian role is required to preserve the city of Jerusalem with its Islamic and Christian religious compound in full detail.”