Council of Ministers Session No. 77

Council of Ministers Session No. (77)

Shtayyeh calls upon countries that have refused to annexation to condemn the new settlements projects, as every settlement unit is, by itself, an annexation project

The crisis of electricity will over before winter by operating the power stations of Sarrah, Qalandia and Beir Ola

Allocating an amount of USD 55 million for health, educational and youth projects and to help the poor from the Arab Fund for Economic and Social Development in Kuwait

Ramallah – Prime Minister's Office: H.E. the Prime Minister, Dr. Mohammad Shtayyeh, called upon sister countries that have or intend to choose normalization with Israel to learn from history and not to be fooled by the American – Israeli Promises, not only for Palestine, but also for their own people and home countries.

During the Council of Ministers weekly session, that was held Wednesday via the Video Conference, the Prime Minister called upon Arab brothers to refuse the continuous temptations of normalization with Israel, under the excuses of fighting Iran, investment and money, or even to omit the names of those countries of the lists of the terrorism, pointing out the Israeli – American pressure that is aiming at serving the election campaign of the US president, Donald Trump, will evaporate.

The Prime Minister condemned the Israeli intention of establishing 5400 settlement units on the Palestinian land, as a way o increasing and expanding the already existing units. He called upon countries that have refused the annexation project, to also reject those new settlements projects, and put an end for this Israeli aggression over our land; thus, the international law should, also stop this aggression. “Every settlement unit, by itself, is an annexation project, and we will keep rejecting it.”

The Prime Minister also pointed that Israel is intensifying its aggression on Al-Aqsa Mosque through recurrent attacks of more than 24 times against al-Aqsa Mosque. The last attack happened this morning. Also, the Israeli occupation prevented prayers in Al-Ibraheemi Mosque for more than 57 prayer times, and yesterday, it has murdered Sameer Ahmad Hmaidi from Bait Laid village in Tulkarem.

Shtayyeh demanded the world and the international institutions to step in and demand the occupation forces to release the detained bodies of martyrs, saying that:”The most aggressive and hideous thing to do to a human is to hold his body and to prevent it from being buried in a manner that is appropriate for a martyr.”

He added: “The archive of occupation is revealing a new chapter of crimes that have been committed against our people during Al-Nakkbah, where the occupation revealed a series of systematic operations of looting and theft committed by Israeli occupation mobs during the days of Al-Nakkbah, as the books, belongings, carpets, furniture and cattle were stolen along with everything else the Palestinians have left behind during that drastic times of Al-Nakkbah.” He also confirmed that these records are preserved at the United Nations and we will work on restoring them through international courts and any other available means.

The Prime Minister said: “We are living under hard circumstances from financial siege, pressure, confusion, and deformation of our people’s true story and its militant history, but we will always be a strong nation able to overcome siege and overcome this crisis as we have done once before. Yet, this time, we will emerge stronger with the national unity and the end of division, by heading towards elections and breaking from occupation through the strategy of resistant resilience until the full and complete indecency. Until this day comes, we will continue to embody our state over the land with you and through you.”

Moreover,  Shtayyeh confirmed that the government is continuing its strict measures to reduce the spread of the Coronavirus, as the world is witness an stronger and a more intensified return of the virus and a high increase in infection cases. We will intensify the measures even more, as the daily rate of infections is still high and disturbing. Hence, he called citizens to contribute in facing this pandemic by wearing the face mask, social distancing and avoiding the crowded social occasions and events.

He draw the attention to the fact that: “The coming winter will be tough on all of us. To that end, we will hire hundreds of doctors, nurses and health and medical care providers. We now have 45 quarantine,  sorting and treatment centers in Hebron, Dura and Al-Thahreya, and suite in Alia Hospital, in addition to Red Crescent buildings in Halhoul and Nablus, as well as military centers, emergency suite in Palestine Medical Complex, Hugo Chávez, Tubas center, Jenin, Azoun Hospital, Bedia and Qalqiliya center and the Military Hospital in Nablus.”

He also proceeded: “We are now preparing a field hospital in our troops camp in Al-Nueima in Jericho, aside from Jerusalem Hospital. Also, testing labs were opened in Bethlehem, Jenin, Nablus, Hebron and Jerhico, and we working on opening a new lab in Tulkarem. Additionally, we have increased the number of ventilators to be 437 ventilators, as well as increasing the number of ICU beds, where we will add another 50 beds in the upcoming period. We will also provide Gaza Strip with what they need, as we have lists of Gaza Strip’s needs.”

Furthermore, the Prime Minister said that in order to strengthen the government program it planned since day one in order to root in the resistant resilience, he declared the following:

The Prime Minister said: “Our people in the our homeland and Diaspora celebrate the National Heritage Day emphasizing our belonging to our land and our heritage that comprises our collective memory and the essence of our national identity. We celebrate this day as a mean o determination that we are standing still on this land until we achieve our national project and we establish the state with Jerusalem as its capital and the right of return.”

The Prime Minister also added:” I was informed last week with the work progress in the security institution, as I have visited a number of security centers, and I was happy with the belonging and dedication of security members of those who are facing the pandemic and some insecurity in some regions. They are working day and night to protect the safety of the citizen.” He praised them all and saluted doctors, nurses and all the workers in health sectors, saying: “I have visited some health and medical establishments and was introduced to the beehive of doctors, nurses and tests specialists in labs and I really appreciate their efforts.”

The Prime Minister concluded his speech confirmed that we will overcome the current crisis just as we have overcome previous ones, and added: “We are living under hard circumstances from financial siege, pressure, confusion, and deformation of our people’s true story and its militant history, but we will always be a strong nation able to overcome siege and overcome this crisis as we have done once before. Yet, this time, we will emerge stronger with the national unity and the end of division, by heading towards elections and breaking from occupation through the strategy of resistant resilience until the full and complete indecency. Until this day comes, we will continue to embody our state over the land with you and through you.”

Consequently, the Council of Ministers listened to detailed report on the water sector and sewage reformation plan presented by H.E Eng. Mazen Ghoneim, Head of the Palestinian Water Authority, where he reviewed the challenges facing the water sector and the requirements needed to be provided and available; most importantly, the establishment of national water company, development of the West Bank Water Directorate as well as developing the governance system and water resources and processing financial sustainability.

Also, the Council of Ministers listened to a report on the financial situations in light of the fact that Israel is still holding clearance money and the decline of local revenues to the treasury. It also was briefed on the diplomatic efforts at the international level and the meetings that were held on the margins of the 75th anniversary of the General Assembly of the United Nations, in addition to the international attitudes supporting the legitimate national rights.

In addition, the Council was informed with the efforts made by Ministry of Foreign Affairs regarding securing the return of more the 25 thousand Palestinians stuck around the world, as well as the continuous efforts made to evacuate our Gaza people stuck in Algeria, which provided them hotel accommodation until their return to Gaza is secured the soonest. Also, it was briefed with the efforts made to secure the enrollment of our Palestinian students to their universities in the different countries of the world.

Moreover, the Council of Ministers was briefed on the efforts made by Ministry of Social Development in providing support for poor households in the West Bank and Gaza Strip. It also condemned and disapproved twisting the words of the Minister of Social Development and taking it out of its context.

Lastly, the Council listened to a report on the infection rates of the Coronavirus and the efforts made by the Ministry of Health to face the virus through conducting tests and consolidating the health staff, as 29 thousand swaps will be delivered to Gaza Strip within two days.

The Council of Ministers issued the following decisions: 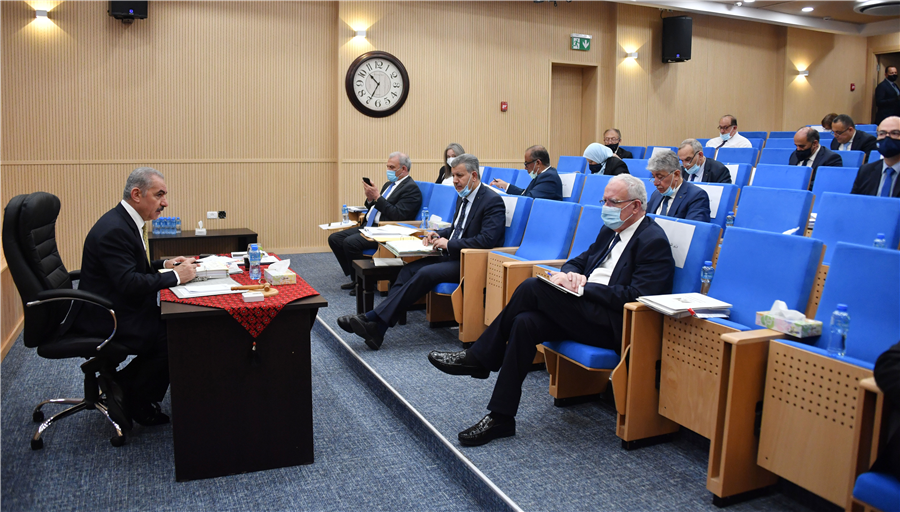