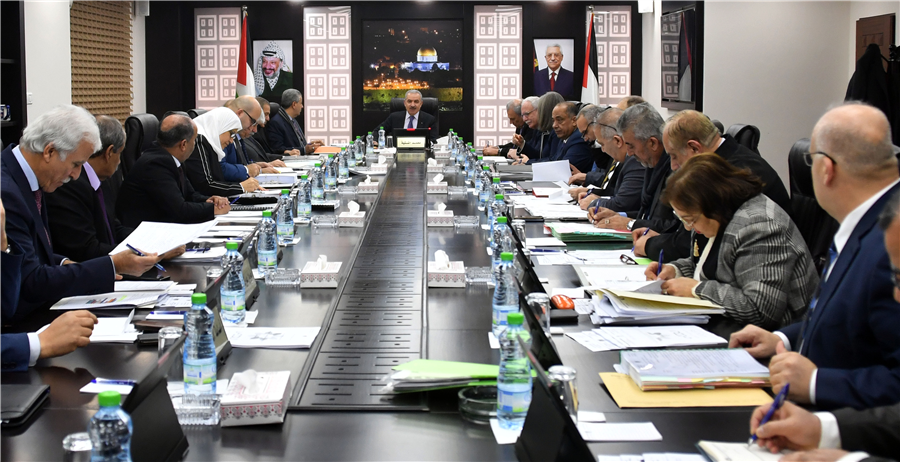 The Palestinian Cabinet decides to form a Palestinian Olive Oil Bank and condemns the statements of the Israeli Minister of War Naftali Bennett on demolishing Palestinian buildings in the so-called 'Area C’, and deplores the Israeli targeting of UNRWA services in Jerusalem.

During the weekly Cabinet meeting held in Ramallah today, Prime Minister Dr. Mohammed Shtayyeh discussed with his government members the establishment of a “Palestinian Olive Oil Bank” to help farmers preserve their crops and to maintain the olive oil surplus, which ranges between (8-10) thousand tons, according to specifications that preserve the quality of the oil, which reached a production of around 30,000 tons this year.

Separately, The Cabinet condemned the provocative tour of the Israeli Defense Minister, Naftali Bennett, this morning to the Jordan Valley, during which he called for the implementation of large-scale demolitions of citizens ’homes and properties in that region. The Cabinet, in this context, stressed that the Palestinian leadership will sue Israel before international courts, and emphasized that The Jordan Valley is the vegetable basket of Palestine, and any measures to annex it are considered void in accordance with the international law.

Additionally, Prime Minister Dr. Shtayyeh deplored the systematic Israeli targeting of the services provided by UNRWA in the occupied city of Jerusalem, especially those against educational institutions, and the closure of the Office of the agency there.