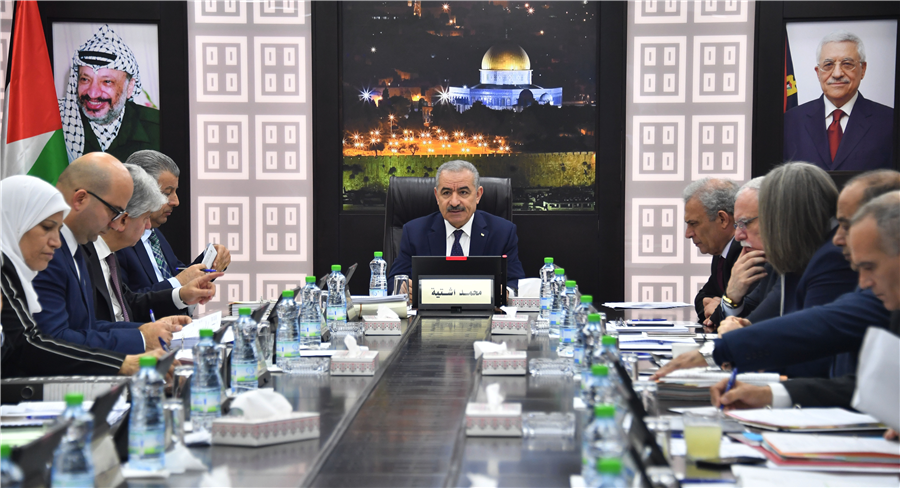 The Palestinian Cabinet welcomes the announcement of the Office of the Prosecutor of the International Criminal Court (ICC), urges world countries to withdraw their presence from Israeli settlements, and blames Netanyahu for ignoring the request of Palestinian leadership to hold elections in Jerusalem.

In his opening statement, during the weekly Cabinet meeting held in Ramallah today, Prime Minister Dr. Mohammed Shtayyeh welcomed the announcement by the Office of the Prosecutor of the International Criminal Court, Fatou Bensouda, on opening a full investigation into war crimes committed by Israel against the Palestinian people in the State of Palestine. “This decision has many indications, the most important of which is the international recognition of the pain and torment imposed by the occupying power on our people, and the recognition of the demarcation of the geographical borders of the State of Palestine on the borders of June 4, 1967, including Jerusalem,” Prime Minister Dr. Shtayyeh stated.

Additionally, Dr. Shtayyeh stressed that the files before the ICC are related to the Israeli aggression against our citizens in the Gaza Strip, and the issues of prisoners and settlement. In this context, Dr. Shtayyeh called upon the countries that have any presence in the settlements to start withdrawing it, whether it is an economic, financial or human presence, and warned that failing to do so will hold these countries accountable before the universal jurisdiction.

Regarding the general elections, Dr. Shtayyeh clarified that we are still waiting for the Israeli approval to hold the elections in Jerusalem. “It is clear that the Israeli Prime Minister is ignoring our request, therefore, President Abbas would invite the Palestinian leadership to hold consultations on the most effective means to address this issue,” Dr. Shtayyeh told.

To conclude, the Cabinet ratified the bilateral agreement on security cooperation between the Palestinian Ministry of Interior and its Turkish counterpart aiming at strengthening fight against organized crime. Separately, the Cabinet ratified an agreement signed between the Palestinian Central Bureau of Statistics and the United Nations Development Program (UNDP) to support the implementation of the training program of data science projects. In addition, the Cabinet ratified an agreement signed with the Spanish Agency for International Development Cooperation to support the implementation of the 2020 census.