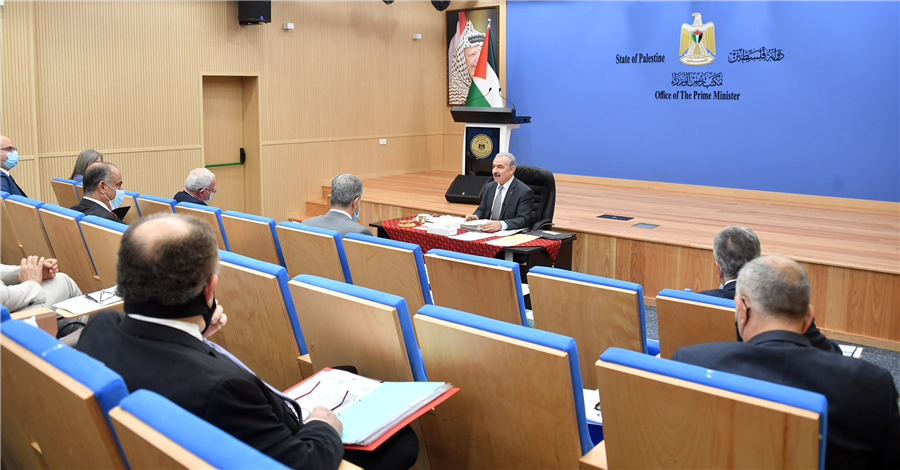 During the weekly Cabinet meeting, held in Ramallah today, Prime Minister Dr. Mohammad Shtayyeh warned of the dangerous consequences that may follow the Israeli annexation plans that are still looming on the horizon, amidst the absence of any official Israeli retreat from those plans that constitute an existential threat to the Palestinian issue.

The Prime Minister praised the strenuous efforts led by H.E. President Mahmoud Abbas at the diplomatic and legal levels in confrontation of these plans.

“Our superior goal is to end the occupation and establish an independent, sovereign, and viable State of Palestine on the borders of June 4, 1967, with Jerusalem as its capital, and the right of return for refugees. We await the decision of the International Criminal Court judges regarding the jurisdiction of Palestine over its territories and its mandate to hold Israel accountable for its war crimes,” said The Prime Minister.

In a different context, The Prime Minister announced an urgent response to the health needs of COVID-19 affected areas, especially in the Governorates of Jerusalem and Hebron, which includes appointing medical and health personnel, purchasing equipment, medicines and ambulances, in addition to disbursing aid to approximately 1,400 owners of shops that were damaged in the occupied city of Jerusalem. The Prime Minister noted that the government implemented a series of measures under a vision that aims at achieving a balance between the people’s health and their economic interests.

The Prime Minister called on all citizens to abide by the health instructions to protect themselves and their community. In addition, The Prime Minister announced the provision of another batch of urgent aid to groups affected by the pandemic, which include university students from refugee camps through 'Waqfet Ezz’ National Fund, affected workers in cafes and restaurants, tourist sector workers, as well as poor and needy families that lost their jobs due to COVID-19 pandemic.

In her turn, the Minister of Health briefed the Cabinet on the developments of the epidemiological situation and measures taken to reduce the spread of COVID-19.

To conclude, the Cabinet condemned the arrest of the governor of Jerusalem, Adnan Ghaith, and the Head of Jerusalem General Intelligence, Colonel Jihad al-Faqih by the Israeli occupying forces. The Cabinet on the international institutions to immediately intervene to release them.