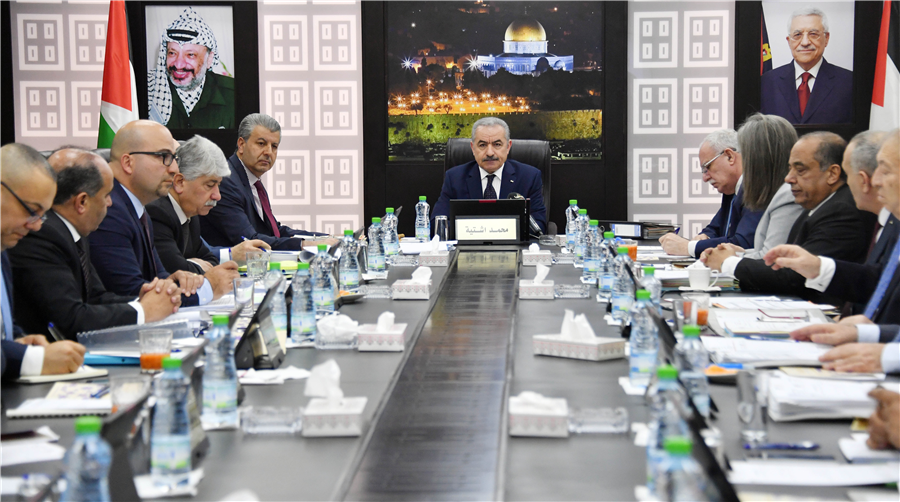 Coordination is ongoing with Jordan regarding the crossing bridge

H.E. Prime Minister Dr. Mohammad Shtayyeh stressed, at the start of the weekly cabinet meeting, which was held in the city of Ramallah today, Monday, that the government, through health and security crews and all of the state’s agencies, is working to reduce the spread of the "Corona" virus, through a series of measures precaution measures, after (5) new cases were recorded, including (4) in the Bethlehem governorate, and one in Tulkarm governorate, bringing the number of people infected with the virus in Palestine until Monday evening to (25) cases.

The Prime Minister announced the opening of a new hospital in Bethlehem this morning which will receive cases of persons infected with the virus, while referring to his meeting with representatives of the private health sector and civil institutions who expressed their willingness to help and provide assistance to the state’s agencies to prevent the spread of the epidemic. H.E said: "We had to close the city of Bethlehem to ensure the safety of its people, and for the sake of ensuring that the virus does not spread in the governorate and outside it. “He saluted the citizens in the governorate, praising their adherence to instructions issued by the state agencies and their attitude in taking the issues seriously to prevent the spread of the disease. The Prime Minister praised the precautionary measures that was initiated by the governor of Bethlehem governorate to close all mosques, churches, monasteries, archaeological sites, parks and wedding halls to prevent the spread of the epidemic.

The Prime Minister affirmed that all precautionary measures are being taken to prevent the spread of the virus under the directions of H.E. President Mahmoud Abbas "Abu Mazen", who is observing all developments, moment by moment, and sets all available capabilities to provide various needs as priorities whether in Bethlehem or in other governorates.

The Prime Minister thanked and appreciated the governors’ medical staff, media crews, and the private sector, as well as the security forces that demonstrated a high commitment in implementing the instructions to prevent the spread of the epidemic. The Prime Minister saluted the spirit of volunteering and the initiation to help Bethlehem, also praising the unprecedented spirit of cooperation shown by our people and the seriousness in dealing with this matter as he said: "This spirit will remain highly appreciated by the Council of Ministers."

The Prime Minister also called on all ministers to conduct field visits to their government departments to ensure that all safety measures are fully implemented, indicating that the Ministry of Finance has prepared an emergency budget to counter the virus, also stressing that the government is following the needs of our people in Jerusalem.

The Prime Minister gave orders the ministers to deal positivity with women employees in government institutions, and to deal with each case separately, regarding the daily working hours that will take into account the conditions of women employees who have children in schools, kindergartens and nurseries, and who have no other options for childcare during their absence. He called for developing attendance and absence arrangements via (eye print) instead of finger print, in order to prevent the transmission of the virus, and work to sterilize all government buildings.

As for teachers duty in schools and universities, the Council of Ministers, and the Ministers of Education and Higher Education, have been empowered to take appropriate decisions that guarantee a partial time duty for teachers in schools and universities, to prepare distance learning programs, to compensate students throughout the closing period. In this context, the Council of Ministers calls on the people to keep their children at home as much as possible and to avoid gatherings except for the utmost necessity.

He also called on the Council of Ministers to deal with foreigners residing in all governorates who have been working to serve the Palestinian people for years as citizens and take all precautionary measures towards them as well to prevent the spread of the virus.

The Council of Ministers requested the private sector and all civil and community institutions to take into consideration the prevailing conditions and consider the necessity to deal positively with employees and estimate their ability to perform the tasks required of them, especially employees who have children in light of the closure of schools, nurseries and kindergartens in all governorates.

The Council of Ministers mourned the victims of the tragic fire that occurred in the Nusseirat Market in the central Gaza Strip, which claimed the lives of (12) citizens, and injured (56) others which the cabinet was directed by H.E President Mahmoud Abbas to handle treating them.

(Cabinet Meeting number (46
The meeting called on our people in the Gaza Strip to abide by the instructions of the P..
Read More