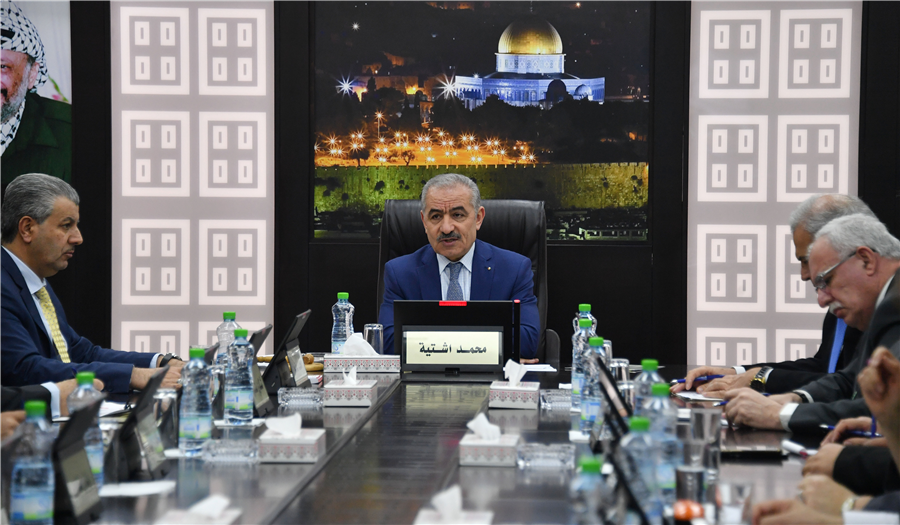 The Palestinian Cabinet announces its full support for the Palestinian leadership and President Abbas in any political, legal, economic and popular measure they deem suitable in facing the latest US decision on Israeli settlements, promises to activate the law on products from Israeli settlements with imposing maximum punishment, denounces the Israeli invasion of the Palestinian Broadcasting Corporation and Ministry of Education offices in Jerusalem, calls on the EU and Russia to revoke the citizenship of Israeli settlers holding dual citizenships from these countries besides their Israeli citizenship.

“Attempting to make our people pay the price of holding the American president accountable to his Congress, pleasing his extremist audience, and rescuing his partner in Israel through measures against the Palestinians is a miserable attempt that will not deter our people from continuing their struggle to end the occupation,” Shtayyeh told.

“The settlement movement is one of the symptoms of the greatest scourge, which is the occupation. The whole universe responded to the announcement of the US administration through condemnations and firm stances considering the occupation illegal, and settlements illegitimate, and so is the decision of the US,” Shtayyeh added.

Moreover, Shtayyeh stressed that “the US administration is trying to undermine the two-state solution, break the legal framework of the political path, consolidate the status quo and recognize it. Israel has no legal, historic or political powers to occupy our land or build settlements on it.”

“This emergency Cabinet meeting, held upon the supervision of President Mahmoud Abbas, is following up on the Arab and international legal and political efforts in the Security Council, the UN General Assembly, international courts and the Council of Arab Ministers of Foreign Affairs and seeks to translate international mere statements and put it into action,” Shtayyeh clarified.

Shtayyeh, furthermore, expressed that “the Palestinian Cabinet supports the leadership and decision of President Abbas in all political, legal, economic and popular measures they deem suitable in this matter and that the Cabinet would discuss issues related to settlement goods, workers in settlements, students at the University of the Ariel settlement as well as other related issues to the illegality of the Israeli settlements.”

Prime Minister Dr. Shtayyeh have also affirmed that “The Cabinet will work to activate the law on dealing with settlement goods with imposing maximum punishment.”

“We demand the International Criminal Court to immediately start investigating the file submitted by the State of Palestine with regard to the settlements referred to it for a long time. It is important to translate the mere global statements into an actual recognition of the State of Palestine on the 1967 borders with Jerusalem as its capital and the right of return for refugees,” Shtayyeh declared.

Additionally, Shtayyeh called on the European Union and the Russian Federation to revoke their citizenships granted to Israeli settlers residing in colonial Israeli settlers built on illegally confiscated areas.

To conclude, Prime Minister Dr. Shtayyeh condemned the Israeli invasion of the Palestinian Broadcasting Corporation and Ministry of Education offices in Jerusalem, which serve Palestinian citizens there.