Shtayyeh: Adhering to elections is the main key for ending division and confronting ongoing Israeli aggression 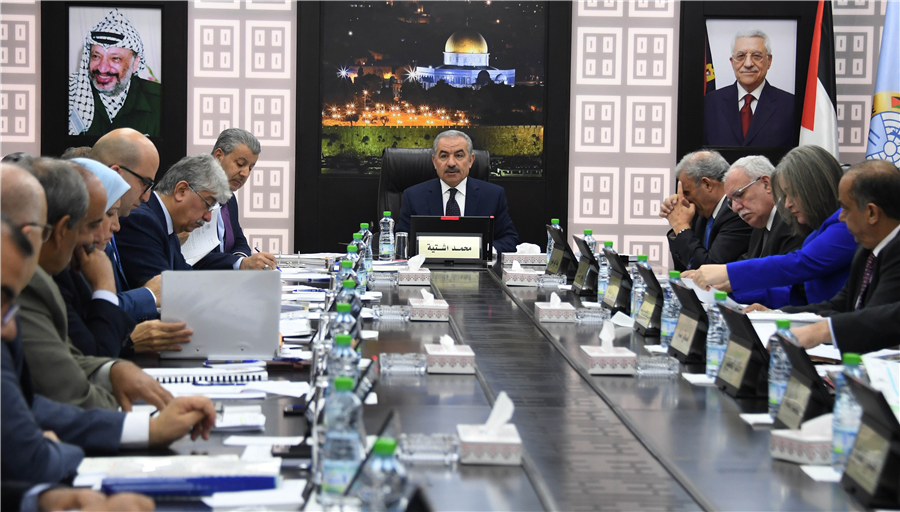 The Palestinian Cabinet condemns Netanyahu’s incitement against Palestinians of 1948 and their leaders, calls upon the international community to exert efforts on releasing ill Palestinian prisoners in Israeli prisons, and deplores Israeli attempts to take over archaeological sites.

In his opening statement, during the weekly Cabinet meeting held in Ramallah today, Prime Minister Dr. Mohammed Shtayyeh condemned Israel for targeting Palestinian journalists to silence their voices and obscure the truth, and applauded the widespread solidarity campaign with the journalist Muath Amarneh.

In the same context, Dr. Shtayyeh called on activists to shed lights on all Palestinian victims of Israeli crimes, the latest of which was the killing of 8 members of the Swarka family among 26 other martyrs and hundreds of injuries in the recent aggression on the Gaza Strip, in a flagrant violation of all international laws and resolutions providing protection to civilians. “Netanyahu ignited this aggression against our people in the Gaza Strip to bolster his third electoral campaign through spilling Palestinian blood and disrupting the general elections. Therefore, we have to stick to the option of elections as a key to confront the ongoing Israeli aggression against our people, end the internal division between Palestinian factions and achieve unity,” Shtayyeh stated.

In a different context, Prime Minister Dr. Shtayyeh briefed the Cabinet on the outcomes of his visit to Sweden, which included talks and discussions with the Swedish Prime Minister, the Speaker of Parliament and the Minister for Foreign Affairs, in addition to his participation in the Progressive Alliance Conference, which included 70 countries, as well as meetings with the Palestinian community there. Dr. Shtayyeh stressed the importance of using the international economic and political powers along with its supportive positions for the benefit of the Palestinians, and demanded Sweden to support programs on women and youth empowerment.

Separately, the Prime Minister condemned the incitement campaign led by Israeli Prime Minister Benjamin Netanyahu against the Palestinians of 1948 and their leaders, and considered that this campaign exposes the falsehood of democracy in Israel, and classifies Israel among the colonial and racist countries.

The Prime Minister, additionally, called on the international community to exert efforts to release ill prisoners, in need of urgent medical treatments, especially Shadi Mousa, and Sami Abu Diak, s well as other prisoners who still experience an extreme suffering inside Israeli prisons.

Furthermore, Dr. Shtayyeh praised the vote of 170 countries at the United Nations in favor of renewing the mandate of the United Nations Relief and Works Agency for Palestine Refugees (UNRWA), expressing his appreciation to the countries that voted for the resolution “This international majority reflects the broad solidarity with our people and their legitimate rights,” Shtayyeh stressed.